Can an Android smartphone with bleeding edge hardware, fancy cameras, and high-end features be considered a flagship handset if it ships without any Google apps or access to the Play Store? Huawei certainly thinks so, and that is precisely how it is labeling its new P40 series consisting of the P40, P40 Pro, and P40 Pro+.
All three models are powered by a fast Kirin 990 5G system-on-chip featuring an octa-core CPU and Mali-G76 GPU, along with an neural processing unit. On the CPU side, we are looking at two ARM Cortex-A76 cores clocked at 2.86GHz, another two of the same cores clocked at 2.36GHz, and four Cortex-A55 cores clocked at 1.95GHz. 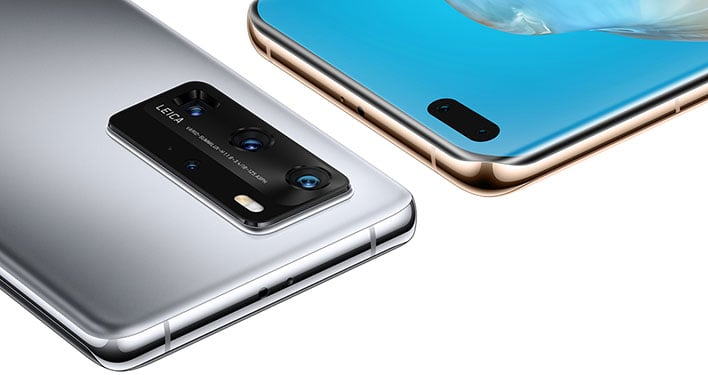 Where these phones really separate themselves from one another is with the camera arrangement. All three offer up a 32-megapixel shooter on the front for snapping selfies. The P40 supplements this with an IR camera, while the Pro models feature a depth sensor.
All three also boast a big 50-megapixel main rear camera. It is a wide-angle lens with an f/1.9 aperture. After that, the separation beings. The P40 flanks the main camera with a 16-megapixel ultra-wide angle lens (f/2.2 aperture) and an 8-megapixel telephoto lens (f/2.4 aperture, optical image stabilization).
Meanwhile, the P40 Pro pairs the 50-megapixel lens with a large 40-megapixel CineCamera ultra-wide angle lens (f/1.8), 12-megapixel SuperSensing telephone lens (f/3.4 aperture, optical image stabilization), and a 3D depth sensing camera.

Finally, the P40 Pro+ mates the 50-megapixel camera with the same 40-megapixel CineCamera lens, but the rest consists of an 8-megapixel SuperZoom sensor (10X optical zoom, f/4.4 aperture, optical image stabilization), 8-megapixel telephone lens (3X optical zoom, f/2.4 aperture, optical image stabilization), and a 3D depth sensing lens.
These are impressive specifications for sure. Other features that are notable include the built-in fingerprint sensor nestled underneath the full-front displays on all three models, 5G connectivity, and Huawei's own voice assistant called Celia.
The reason Huawei had to that route rather than tapping in Google's voice assistant is because Google is not allowed to support these phones. It is part of a government ban with the Chinese smartphone maker, and so other than building the P40 series around Android, which is open-source, the ban prevents Huawei from installing Google's various apps and services, including the voice assistant and the Play Store.
Huawei's solution is to roll with its own AppGallery store with alternatives to Google's apps like Google Maps, and inject its own voice assistant. Will consumers be swayed? We'll have to wait and find out.
That brings us to pricing. Huawei has launched the P40 at €799, the P40 Pro at €999, and the P40 Pro+ at €1,399.