Details on the Huawei P40 and P40 Pro have turned up on Twitter from reliable gadget leaker Ishan Agarwal. According to the leaker, the Huawei P40 Pro 5G smartphone will have a Leica Ultra Vision quad-camera array on the back that includes a 50MP primary sensor, 40MP secondary sensor, 12MP sensor, and a 3D ToF sensor. The telephoto sensor has 50x SuperSensing Zoom and image stabilization.

The selfie camera on the front of the phone is a 32MP unit paired with a depth sensor. The two front sensors are why the phone has such a large cutout in the display. The display will be a 6.58-inch unit with curved edges. The SoC is a Kirin 990 5G unit, but the RAM and storage are unknown at this time. Power will come from a 4200 mAh internal battery that has 40W wired fast charging. The leaker indicates that the device could also support 40W fast wireless charging but admits the device will likely be limited to 27W. With the ban on Huawei devices in the United States, the smartphone will launch with no Google apps installed. 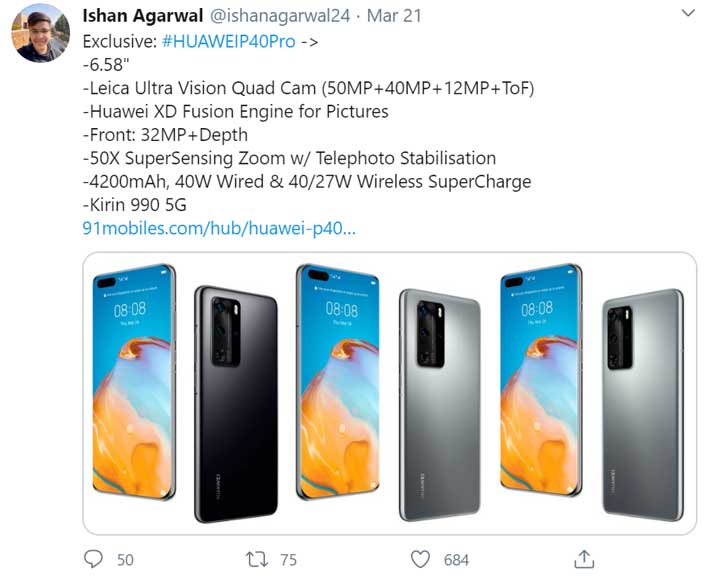 The more basic Huawei P40 will allegedly have a 6.1-inch rear display with a smaller cutout for the 32MP front selfie camera. The rear camera array has a 50MP, 16MP, and 8MP sensor with up to 30x digital zoom. Power is tipped to be from a 3800 mAh battery, and the device will support 40W fast wired charging along with 27W wireless charging.

Both smartphones are expected to be announced on March 26, with pricing made available at that time. Huawei and the United States government have had a contentious relationship, with the latter claiming that the former has backdoors built into networking equipment and other hardware products that could allow the Chinese government to spy on Americans. Huawei has long denied this, but in February of this year, the United States government reportedly gave "smoking gun" evidence to partner nations showing that Huawei indeed had backdoors into the equipment it sold.