In case you were wondering, HTC is not disappearing from the virtual reality space. Just the opposite, the company has introduced a new high-end PC VR headset, the Vive 2 Pro, with some significant upgrades over the previous generation model. Chief among them is a 5K resolution display. That works out to 4896x2448 pixels combined, and 2448x2448 per eyeball.
That puts it right up there with the highest resolutions offered among consumer VR headsets. Here's how it breaks down...
That's also a higher resolution than what Sony's upcoming PSVR 2 for the PlayStation 5 is rumored to offer (2000x2040 per eye). It features a 120Hz display too, and a fast-switch LCD with RGB sub-pixels, which should result in sharper imagery—this is what you want from a high-end VR headset. And as for the field of view, it's 120 degrees courtesy of a new bespoke dual stacked-lens design.


"These advances mean minimal motion blur and the ‘screen door effect’ is virtually eliminated, giving people a more natural and immersive experience," HTC says.
HTC is claiming the weight on the Vive Pro 2 is evenly distributed to make it more comfortable. There's also an adjustable head strap, a quick-adjustable sizing dial to get the fit just right, and perhaps most importantly, a uses can finely adjust the inter-pupillary distance (IPD). For some people, this is an issue with the Oculus Quest 2.
IPD is an important part of VR. In simple terms, it is the distance between your eyeballs, and being able to finely adjust the lens spacing gives you a clearer image, and can help avoid motion sickness. The Quest 2 only has three preset lens spacing positions—58mm (narrowest), 63mm (middle), and 68mm (widest). Oculus claims these settings cover 95 percent of adults, but the Vive Pro 2's fine adjustment dial means you can tune it in just right.
Interestingly, HTC also said it worked closely with AMD and NVIDIA to utilize Display Stream Compression (DSC), a first for a VR headset.
"Display Stream Compression ensures maximum visual quality and is also backwards compatible with DisplayPort 1.2, so even graphics cards which supported Vive Pro will see a benefit with Vive Pro 2," HTC says. 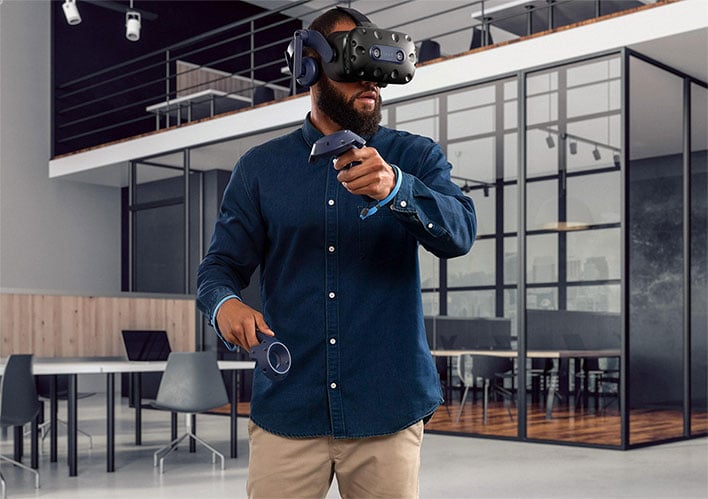 On the audio front, the Vive 2 Pro boasts 3D spatial sound with Hi-Res Audio certified headphones with integrated dual micrphones, and support for third-party headphones.
This is not an all-in-one headset, meaning you need to plug it into a PC. The minimum requirements call for an Intel Core i5-4590 or AMD Ryzen 1500 CPU, a GeForce GTX 1060 or Radeon RX 480 (you'll need a GeForce GTX 20 series or Radeon 5000 series for full resolution mode), 8GB of RAM, DisplayPort 1.2 or higher (DisplayPort 1.4 for full resolution), a spare USB 3.0 port.
HTC's headset is not cheap, though. Whereas the Quest 2 starts at $299, the Vive 2 Pro costs $1,399 for the full kit, which includes the headset, a pair of second generation base stations, and Vive controllers. If you're upgrading from the first-gen Vive Pro, you can grab the Vive Pro 2 headset by itself for $799 (it's available to preorder for a discounted $749).
It will be interesting to see how well the Vive 2 Pro sells, giving its premium price point. The headset is certainly in a different class than the standalone Quest 2 (which can be tethered to a PC as well), but it's comparatively low price has proven popular, even with the requirement that it has to be linked to a user's Facebook account.