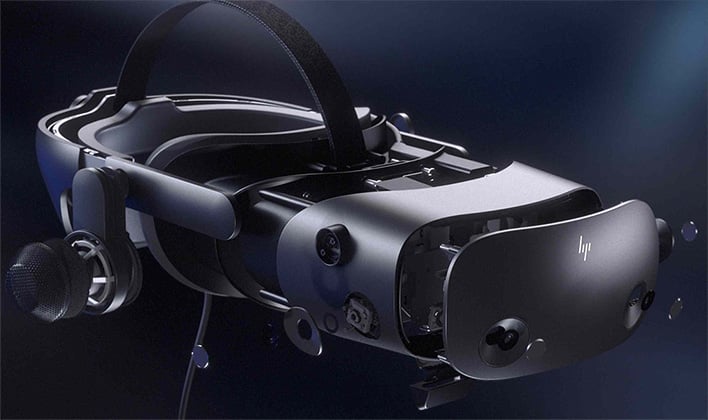 HP is launching a version of its Reverb virtual reality headset that will have a state-of-the-art sensory system, aimed primarily at developer and enterprise customers. According to HP, its new Reverb G2 Omnicept Edition brings about a new era of VR, a bold claim that hinges on the array of sensors being able to capture "physiological responses for a unique user-centric experience."
VR is an era in and of itself, and one that is still in its relative infancy (as it pertains to mass adoption on current hardware). Oculus gets credit for spearheading the modern VR movement, and now several years removed from when the original Rift landed on Kickstarter, there are a bunch of competing headsets, some of which attach to a PC (like the Reverb and Reverb G2) and others that are standalone (like the Oculus Quest 2).
The Reverb G2 Omnicept Edition is armed with a bunch of sensors to measure muscle movement, gaze, pupil size, and pulse. That information "seamlessly transfers" to the Omnicept platform, allowing for real-time human insights to improve training and education. HP also envisions its new VR headset as being useful for enhancing collaboration and design, by way of its additional sensors.
"We’ve designed a powerful, adaptive VR solution to dramatically accelerate the use cases for VR, its potential to transform society, and the way we interact with technology," said Jim Nottingham, general manager and global head, Advanced Compute and Solutions, HP Inc. "The HP Omnicept Solution will open new possibilities for VR development and its impact on enterprise training, remote education, collaboration, research and development, and specialized wellbeing."
According to HP, facial expressions and body language account for half of effective communication. The company also figures that with around 25-30 percent of the workforce likely to be working from home next year (because of COVID-19), the Reverb G2 Omnicept Edition headset could prove a useful tool, in this regard.
Here are some of the highlights...
Outside of the additional sensors (like eye tracking cameras and a heart rate sensor), the Reverb G2 Omnicept Edition uses the same LCD displays as the regular version, which offers a 2160x2160 resolution per eyeball. It also sports the same over-the-ear speakers, but has a dial to make adjusting the headstrap easier.
It will be interesting to see what developers are able to do with this, and if some of the features end up trickling into the consumer space. We will have to wait a bit to find out—HP says the Reverb G2 Omnicept Edition will be available in Spring 2021. Pricing information will be shared closer its release.