Intel has not been shy about in letting the world know it plans to update its desktop CPU lineup with its 11th Gen Core processors, codenamed Rocket Lake-S, sometime next year. It is some of the specifics that are currently kept in a Top Secret folder within Intel's labs, like specific CPU models and other details. If you are feeling impatient, however, a new entry at Geekbench sheds some light on one of the SKUs.
Before we get to that, let's recap what we know for sure, straight from the horse's mouth, so to speak. Rocket Lake-S will feature Cypress Cove cores with up to 8 cores and 16 threads, and a memory controller supporting DDR4 speeds of up to 3200MHz. Intel also has let it be known that Rocket Lake-S will bring support for PCI Express 4.0 (up to 20 lanes), it will have new overclocking features and capabilities, and is claimed to deliver a double-digit IPC improvement.
Interestingly, Comet Lake-S scales to 10 cores and 20 threads, so we will have to wait and see if Intel eventually goes beyond 8 cores and 16 threads with Rocket Lake-S. As things stand, though, that is not in the plans (or at least not in the ones Intel has shared with the public).
Getting back to the Geekbench leak, it is indeed an 8-core/16-thread processor that is on display, as part of an HP Omen 30L gaming PC. Take a look... 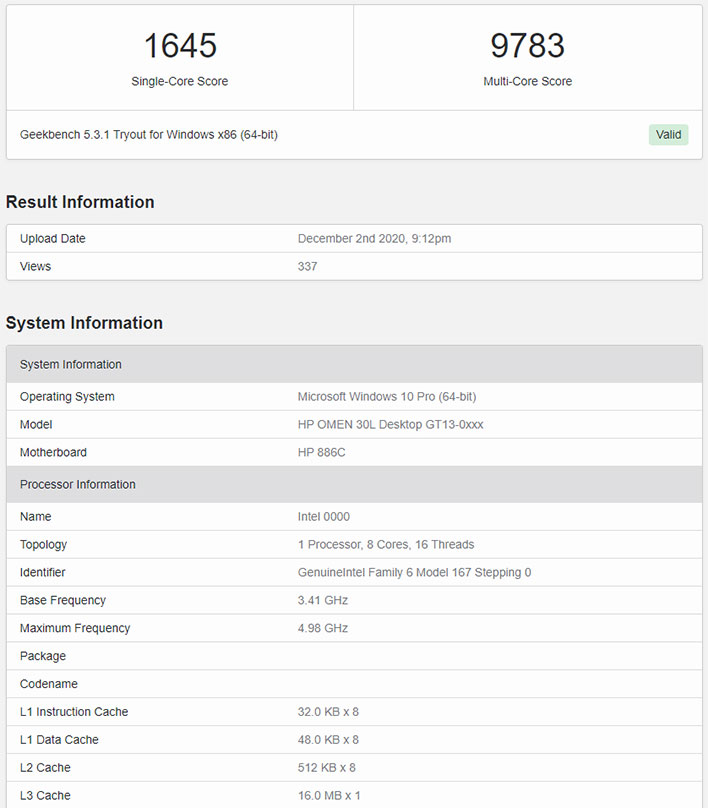 According to the listing, this particular Rocket Lake-S CPU with 8 cores and 16 threads runs at a 3.4GHz base clock and 5GHz turbo clock (both rounded up or down, based on the reported frequencies). It is also listed as having 16MB of L3 cache.
That is somewhat similar in specs to the Core i7-10700K, which is also an 8-core/16-thread CPU based on Comet Lake-S, with a 3.8GHz base clock and 5.1GHz boost clock, and 16MB of L3 cache. The regular (read:non-K) Core i7-10700 is an 8-core/16-thread chip as well, with a 2.9GHz base clock and 4.8GHz turbo clock, and 16MB of L3 cache.
The chip inside the HP Omen desktop is likely an engineering sample, at this early stage. So the specs could change. Same goes for final performance, as drivers and other things take shape. That said, we can get a really rough idea of where things stand. Let's do some comparisons with recently added entries in the Geekbench 5 database...
For each of the other CPUs, some of the scores are higher and some are lower. Generally speaking, though, the Rocket Lake-S part leaked here performs around the same as AMD's Ryzen 7 5800X. That is impressive.
The caveat is that Rocket Lake-S is not here yet. Rumor has it Intel will launch its 11th Gen Core desktop series in March 2021, so there is a bit of a wait. On the other hand, even though Zen 3 has launched, at the moment, the Ryzen 5000 series is in short supply (relative to demand).
In any event, 2021 is going to be an interesting year for PC hardware.