In less than a month, Microsoft will release Windows 11 to the public, its first major new operating system to the Windows ecosystem in over half a decade. Microsoft chose to go this route rather than continue to update Windows 10 with new features and capabilities on a bi-annual basis, even though at one point, it was pitched as being the last major version of Windows. Should you upgrade to Windows 11? Microsoft obviously hopes you will, and is touting the performance advantages that will come with making the migration.
One thing we've already previewed with Windows 11 is how it is better equipped to handle hybrid architectures, like Intel's upcoming Alder Lake CPUs. We tested this using a laptop with Lakefield-based Core i5-L16G7 processor, and compared the performance between Windows 10 and preview build of Windows 11. What we observed was a notable performance boost from Windows 11.
We'll have to wait and see how the final build benefits Alder Lake when both arrive. In the meantime, Microsoft put out a video highlighting the optimization and performance improvements that will come along for the ride when Windows 11 embarks on PCs. Here is it is...

There's definitely a puffery tone throughout the video, and Microsoft kind of tiptoes around the controversial Trusted Module Platform (TPM) 2.0 support that it is enforcing in Windows 11, as well as where CPU support cuts off. But there's also some interesting bits that we are eager to test for ourselves when the final release lands.
One of the things Microsoft vice president Steve Dispensa calls a "big shift" in the video is app and process prioritization. He says Microsoft put in a lot of work underneath the hood to tweak Windows 11's memory management, in an effort to favor applications running in the foreground. This also apples to launching another program when there's already a heavy load on the system. 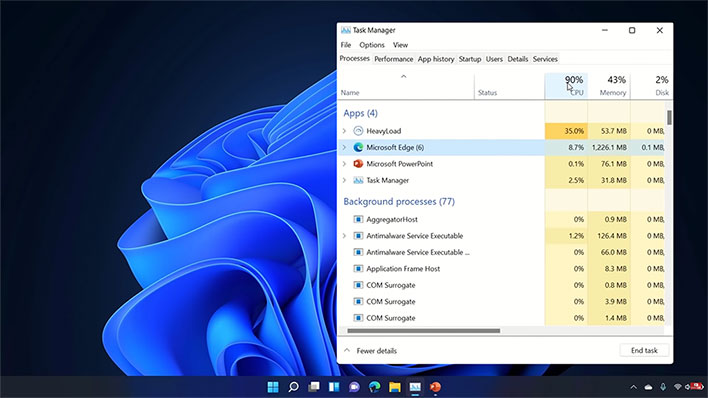 To highlight this, he brings up the Task Manager to show a 90 percent load on the CPU, then proceeds to open up additional apps, including Word and Excel. Even though the CPU is already being hammered, the apps load quickly without any lag. The reason is because they are in the foreground, so they are allotted more resources.
Put another way, Windows 11 is designed to feel responsive and faster whether the CPU is idle or heavily stressed. Along those same lines, he also talked about Edge having its Sleeping Tabs feature enabled out of the box. According to Microsoft, this feature reduces memory usage by 32 percent on average, and CPU usage by 37 percent.
Another thing Dispensa discussed is resume-from-sleep performance in Windows 11. He says Microsoft "optimized calls to hardware components that need to power on for better overall memory management, and at the software layer, we've reduced starvation across key processing threads so that power is reserved for the threads that really need it."
These tweaks optimize resume-from-sleep by 25 percent, which for most people, translates to a PC waking up instantaneously. The other benefit is being able to stay in a sleep state longer and not have to hibernate as often.
Updating Windows 11 should be faster too. Updates are said to be up to 40 percent smaller. In addition, Microsoft made optimizations to the update engine in Windows 11, to improve the way updates are packaged and offered.
We'll have to see how it all comes together when Windows 11 ships out in final form. Fortunately we don't have long to wait, as Windows 11 is due to arrive on October 5, barring any last minute delays.