Epic Games be “taking one for the team” by standing up to Apple’s App Store policies, which it has deemed anticompetitive. Epic says that it isn’t seeking money in its lawsuits against Apple (and to a lesser extent, Google), but it is instead seeking a new fee structure for app developers that doesn’t result in a 30 percent cut for Apple.

Epic’s revolt against Apple has resulted in Fortnite being removed from the App Store, but there’s still a way for you to reinstall the game… with one big caveat attached. First of all, it should be noted that when Apple kicks an app or game out of the App Store, it’s not actually removed in most cases. Instead, Apple has simply removed Fortnite from its search listings. This of course means that searching for the app brings up no results within the App Store directory, and any previous direct links to Fortnite no longer work (i.e. if you did a web search and came across a URL taking you to Fortnite on the App Store). 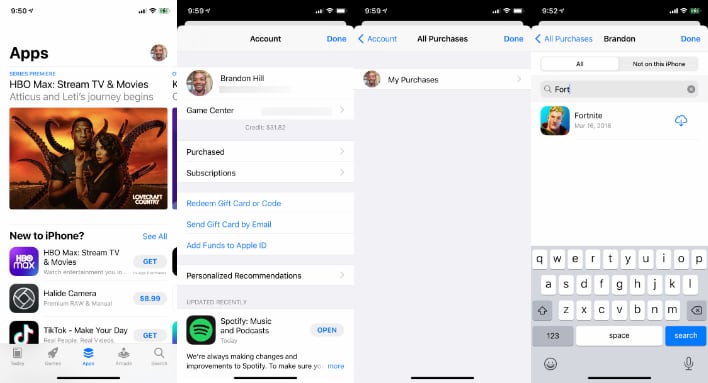 And that leads us to the caveat; as long as you have previously installed Fortnite on any of your iOS devices at some point (which is likely quite a few of you out there) or any devices linked to your family account, there’s still a way for you to reinstall the game despite Apple’s blockade. You can access the game to download it again by taking the following steps:

If you haven’t previously installed Fortnite on any of your devices, you’re simply out of luck at this point – or at least until Apple and Epic can kiss and make up. Given how much money as at stake for both companies, we have the feeling that the two will come to an agreement eventually; hopefully before Apple’s August 28th ultimatum date.

And if you’re really desperate, you could just head on over to eBay…