Apple-Epic Insanity Leads To iPhones With Fortnite Installed Selling For $10,000 On eBay

While many developers have complained that Apple takes too big of a chunk out of the profits for apps they sell on the App Store and on in-game purchases, few attempt to do anything about it. Epic Games, the developer behind the popular free-to-play shooter Fortnite, is taking on Apple and Google in court. Fortnite was recently booted from both the Apple App Store and Google Play for blocking both from their cut of the profits from in-game purchases. While Android smartphone users can install the game directly from Epic, iPhone users (who have never previously downloaded the game) are unable to obtain it at all without paying insane prices on eBay for used devices.

Some iPhone users are trying to take advantage of the situation by putting devices with Fortnite on eBay for insanely high prices. The image below shows one seller trying to sell an iPhone 6S with Fortnite installed for $10,000 Buy It Now, with a starting bid of $1,000. While the listing has been heavily viewed, with over six days left as of writing, the device has no bids. 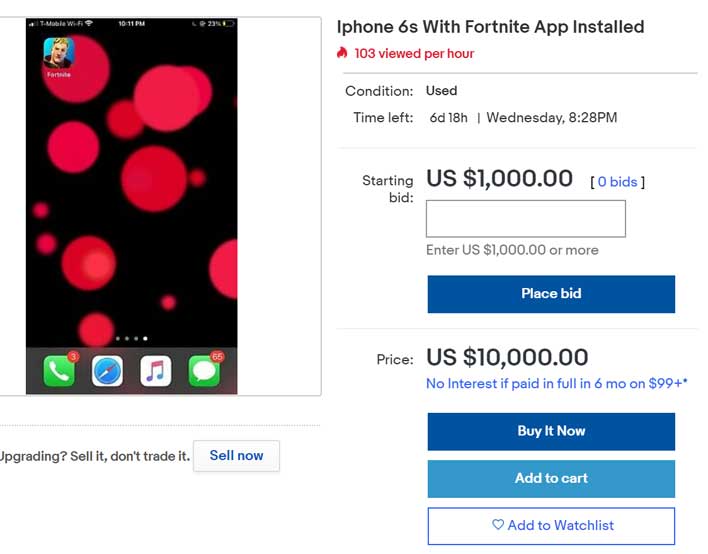 A quick perusal of eBay in the US with the search term "iPhone Fortnite installed" shows nearly 500 listings with prices from $500 to the one mentioned above. A few listings do have bids, including one for an iPhone 7 with the game installed that is bid up to $100 with over four days left. Another listing for an iPhone 11 Pro Max with Fortnite is bid up to $560 as of writing.

Looking at the Sold Items shows that people have been paying insane prices. One iPhone 7+ with the game installed sold for $3999.99. An iPhone 11 Pro with Fortnite sold for $4750. It remains to be seen if Epic Games or Apple comes on top in the pending litigation. Apple will vigorously defend itself and has a history of winning in court. Apple recently threatened to terminate Epic Games' developer accounts for iOS and Mac, which Epic says is retaliation over its lawsuit. It's unclear how the legal battle between Epic and Apple will turn out.