Halo: Infinite’s Graphics On Xbox Series X Are So Underwhelming That Even Dominos Is Cracking Jokes

Oh. My. Goodness. You might be having a bad day, but did you wake up to a tweet by Domino's Pizza making fun of you? Microsoft did, following the gameplay reveal of Halo: Infinite, an upcoming launch title for the immensely hyped Xbox Series X console that is due to arrive this holiday season (November or December), with Navi in tow.
Gamers were not super impressed with the gameplay reveal, as it pertains to the graphics. The Xbox Series X is touted to arrive with plenty of horsepower, served up by custom AMD silicon based on the chipmaker's Zen 2 CPU cores and next-generation RDNA 2 graphics (Navi), with hardware support for real-time ray tracing.
Instead of being blown away by the visuals, however, some viewers took to social media to criticize the graphics in Halo: Infinite as not being next-gen enough. Then 0 joined in the fun, at Microsoft's expense. Have a look... 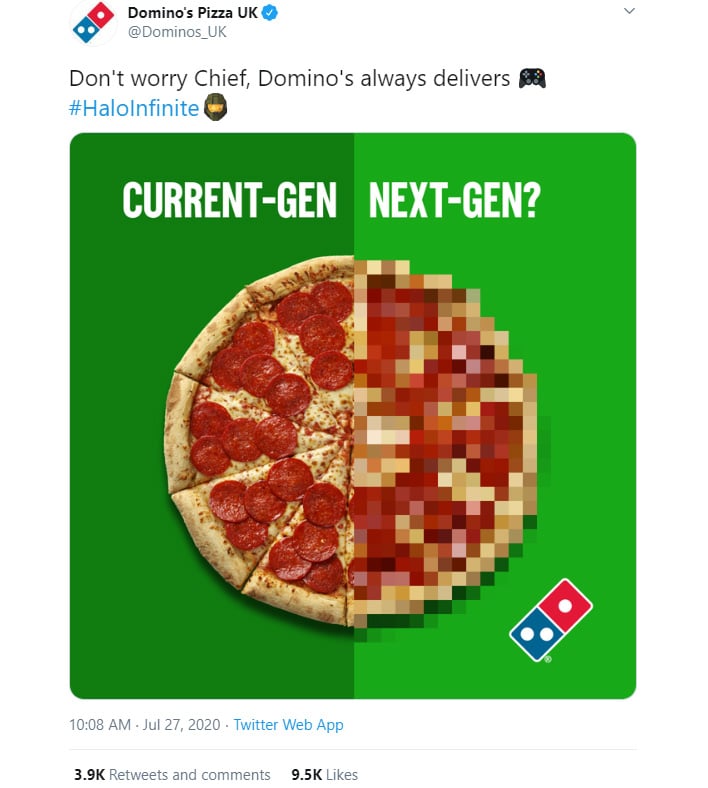 "Don't worry Chief, Domino's always delivers," the tweet reads, with both a controller emoji and a Master Chief emoji.
The text accompanies a comical photo of a pizza, with one half (labeled as "current-gen") looking like it should, and the other half (labeled as "next-gen?") being pixelated and not at all what a person would expect a pizza to look like.
It's a funny tweet for sure, but is it accurate? Well, the gameplay reveal was actually shown running on a PC, not the Xbox Series X, albeit with specs that are roughly the same. Halo: Infinite is not a finished product, as Xbox marketing boss Aaron Greenberg relayed in an interview with Inside Gaming.
"Listen, we’re in the middle of a global pandemic. It’s July, we’re far from [the holiday [launch], you’re seeing a work-in-progress game," Greenberg said. He added, "It’s very hard to show the full power and graphical fidelity of what Xbox Series X will be able to deliver for you over a stream. Go back and look at it in 4K 60."
Likewise, 343 Industries Studio head Chris Lee shared a similar sentiment during a Q&A session with the press.
"I think for the response on the graphics, the thing I hope is that folks get a chance to check out our 4K streaming assets, I think that really lets our game show itself in full fidelity. We are definitely still very much in development, we have some polishing and tuning that the team is working on to really bring the full potential of our experience to our fans later this year in Halo Infinite," Lee said.
Lee also promised that Halo: Infinite will be a polished product when it arrives later this year. We'll have to wait and see how different the shipping game looks to the recent demo.