Look, JEDEC might be fine and dandy with DDR5-4800 memory kits, but that's not the kind of speed that excites enthusiasts, not when memory makers had been talking up a big game prior to the launch of Alder Lake (the only consumer desktop platform at the moment that supports DDR5). But a DDR5-6400 memory kit? Now you're cooking with Crisco.
That's still well short of the DDR5-10000 range that will eventually emerge, but hey, you have to walk before you can run, right? And in the professional overclocking scene, someone's already taken G.Skill's memory to DDR5-8888 with the help of LN2 cooling.
Anyway, back to the kit at hand. Or kits, we should say, because there's a range. G.Skill on Thursday unveiled what it has dubbed "extremely low latency" DDR5-6400 memory kits under the Trident Z5 banner. There are four kits in all, each one 32GB (2x16GB) in total capacity, split between its regular Trident Z5 and Trident Z5 RGB lines. Here they are... 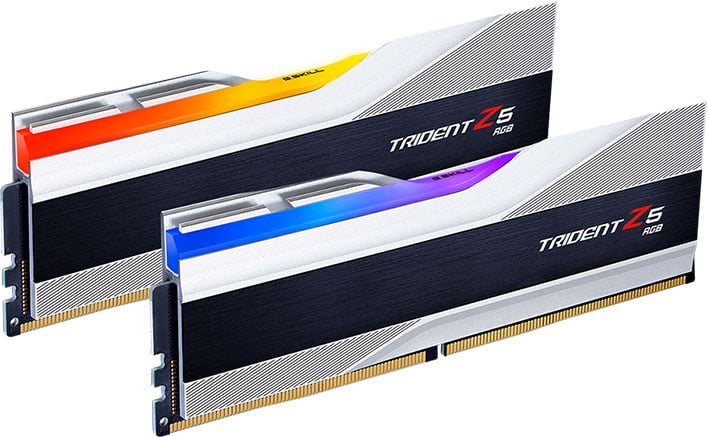 All four kits have their latencies set at 32-39-39-102 at 1.40V. Compared to lower frequency DDR4 memory, those are on the looser side. But in the realm of DDR5 at this speed, those are indeed fairly low, at least by today's standards. Who knows what tomorrow will bring.
"Equipped with exceptionally tight timings, this extreme memory specification represents the next step of the Trident Z5 family flagship performance," G.Skill says.
There's no mention of the specific chips, though it's a safe bet they're sourced from Samsung or SK Hynix. G.Skill doesn't mention pricing, either (it never does because the memory market is too volatile), only that these kits are available now.
We didn't see them on Amazon, but over at Newegg, pricing has settled at $589.99 for the Trident Z5 DDR5-6400 and $609 for the Trident Z5 RGB DDR5-6400.