GPU Sales Suffer Biggest Freefall Since The 2009 Recession, Why Nobody Is Fretting

On the surface, AMD, NVIDIA, and to an extent Intel all had a rough quarter in terms of GPU sales. According to the latest data shared by Jon Peddie Research (JPR), GPU shipments fell off a cliff with the biggest quarter-to-quarter decline in over a decade—since the 2009 recession—coming in way below expectations for what's normally a strong quarter. Next quarter may not be much better. Even so, however, Peddie says "everyone will have a happy holiday."
More on that statement in a moment, but first let's go over some sobering figures. According to JPR's latest GPU report, overall shipments decreased a whopping 25.1 percent compared to last year, and 10.3 percent sequentially. These figures take into account all platforms and all types of GPUs, including those that are integrated into CPUs.
If looking solely at desktop graphics cards, shipments decreased by 15.43 percent compared to last year and 33.5 percent sequentially, while notebook graphics slid 30 percent.
As to the reason for the significant declines, different companies provided a range of explanations, including the dismantling of cryptocurrency mining rigs. That makes sense, given that miners flooded the market with used GPUs, which don't factor into JPR's accounting of shipments.

"All the companies gave various and sometimes similar reasons for the downturn: the shutdown of crypto mining, headwinds from China’s zero-tolerance rules and rolling shutdowns, sanctions by the US, user situation from the purchasing run-up during Covid, the Osborne effect on AMD while gamers wait for the new AIBs, inflation and the higher prices of AIBs, overhang inventory run-down, and a bad moon out tonight," Peddie said in a statement.
e
So what's the reason why nobody is fretting? Simply put, even though companies anticipate another downturn in shipments next quarter, "ASP's will be up, supply will be fine, and everyone will have a happy holiday," Peddie says.
We're already seeing this play out to some extent with the launch of NVIDIA's GeForce RTX 4090 and GeForce RTX 4080, which start at $1,599 and $1,199, respectively. Finding the former in stock for close to its MSRP is a tough proposition right now, and while the 4080 is a little easier to come by, a lot of models are showing as being out of stock at places like Newegg.
That said, an argument could be made that PC gamers are waiting for AMD and NVIDIA to introduce their mid-tier and entry-level models within their respective RDNA 3 and and Ada Lovelace lineups. Some of those are expected to be announced at CES in January 2023. 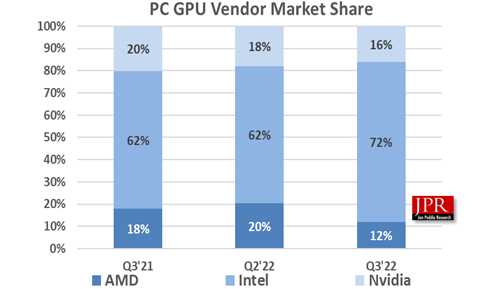 As for market share figures, this particular GPU report only focuses on overall shipments, which are skewed by CPUs with integrated graphics. Taking those into account, Intel's share is at 72 percent, NVIDIA is at 16 percent, and AMD is at 12 percent.
It will be interesting what this graphing looks like a few quarters from now. AMD's Ryzen 7000 series (Zen 4) CPUs feature integrated graphics, and all three companies recently launched new GPUs (RDNA 3, Ada Lovelace, and Alchemist).