Google has attempted to answer why the fingerprint sensor on its Pixel 6 phones is, at times, noticeably sluggish. For some, however, the reason Google gives just does not match up, leaving them to wonder if there is more at play.

The Pixel 6 and 6 Pro are the first in the family of Pixel phones to have an under-screen fingerprint sensor. Since its launch last month, users have been complaining about the sensor being slow to recognize their fingerprints and at times not recognizing the print at all. Here at HotHardware we noted in our Pixel 6 and Pixel 6 Pro review that the sensor was at times a bit slow for us too. Well Google has taken to Twitter with both an apology and an excuse as to why it believes this is the case. 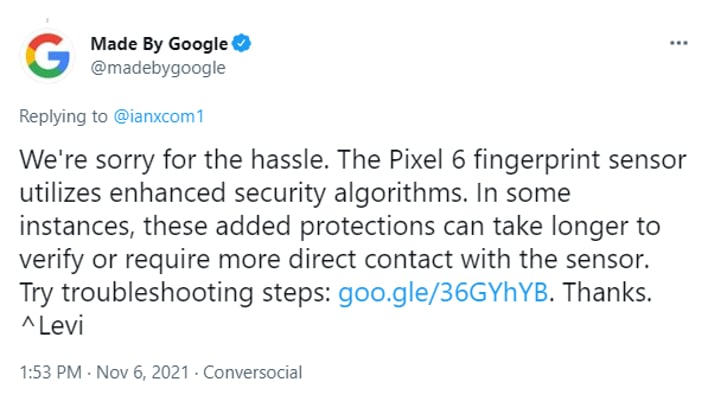 In Made By Google's tweet, it said it believed the issue involved the fact that the Pixel 6 sensor utilizes enhanced security algorithms. Because of this users may need to hold their finger on the sensor longer and in more direct contact to unlock their phones. The tweet also provides a link to a help page on how to unlock your Pixel phone with your fingerprint. This page provides some troubleshooting tips for those encountering fingerprint issues.
This explanation has left some scratching their heads wondering if this in fact the actual culprit. It seems other users on Reddit have said that the fingerprint issue goes beyond just being sluggish and unresponsive at times. There have also been reports of other people's fingerprints unlocking someone's phone. One user indicated that his wife was able to unlock his Pixel 6 with her index finger. While in this case the person was using a screen protector that could have been the issue, other users have said they have had instances where other fingerprints were successful at unlocking their phones without a screen protector. This has led some users commenting on social media that they may not keep their Pixel 6 for the long term.

This could mean that Google's sensor has more going on than its algorithms. Samsung suffered a similar issue in 2019 when it introduced its new ultrasonic fingerprint scanner on the S10 and Note10 when used with cheap screen protectors. In that case, Samsung was eventually able to remedy the situation with a software update. Hopefully Google will be able to do the same, if in fact this is something that can be improved on the software side.

Some users have also reported that after they erased their original fingerprint and added it back, the issue seemed to go away. If you are experiencing issues with the sensor on your Pixel 6 you can try some of the troubleshooting techniques listed out on its help page as well. Alternatively, we wrote about super-easy workaround that we verified improves the responsiveness of the sensor—just head to Settings > Display, scroll down to "Other display controls," and toggle on the "Increase touch sensitivity" option.

The Pixel 6 and 6 Pro have been touted as Google's best Pixel yet, even with the issues some are currently experiencing. As software updates continue to be come out and be applied, hopefully owners of the phones will only grow to love their phones even more.