Google Pixel 4a Press Leak, $349 Price Confirmed And This May Be The Pixel 5 You Want

Google is on the cusp of launching some new Pixel phones, including the Pixel 4a and Pixel 5. Leaving little to the imagination, both have been the star of separate leaks this weekend, with official looking renders (and a concept video) and pricing information, and even some specifications to tide you over until Google officially unwraps its upcoming handsets.
Starting with the Pixel 4a, Twitter user and leaker Ishan Agarwal got his mitts on what look to be official press renders (as in, not unofficial mock ups), as shown above. The shots are consistent with past renders we have seen, and in all likelihood are the real deal.
According to Agarwal, the Pixel 4a will feature a 5.81-inch OLED display with an FHD+ resolution and punch-hole design, powered by a Qualcomm Snapdragon 730G processor. It is also expected to arrive with 6GB of RAM and 128GB of built-in storage. A 3,140mAh battery with 18W fast charging will site inside the handset.
You can expect just a single camera on the rear, consisting of a 12.2-megapixel sensor with a 77-degree field of view. It will be capable of recording video at up to 4K at 30 frames per second, or 1080p at 120 frames per second.
According to the latest leak, the Pixel 4a will cost $349. It will be interesting to see how it fares against the likes of Apple's iPhone SE ($399) and the OnePlus Nord (£379, which is around $495). It's also said there will be a 5G variant of the Pixel 4a for $499.
Look for the Pixel 4a to become official on Monday, August 3. 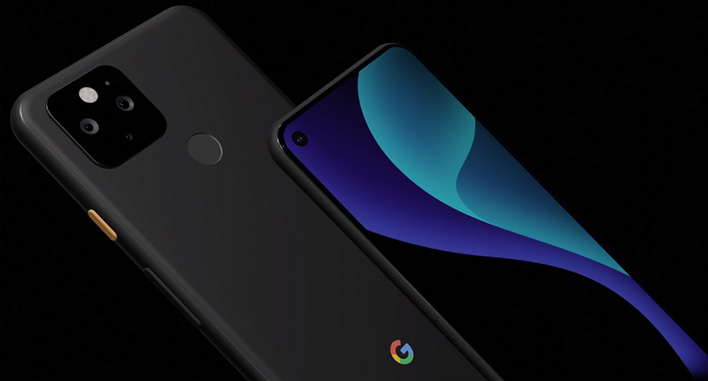 Moving on from mid-range territory, Incosive Labs put together a nifty looking concept video for the Pixel 5, that could pass as an actually launch video. The description is off, though—it looks like they forget to change the text, because the descriptions says this is a concept video for the upcoming iPhone 12 series, which it clearly is not.
In any event, check it out...

As conceptualized, the Pixel 5 is a neat looking handset. In what would be a departure from the Pixel 4 and Pixel 4 XL, the video shows the Pixel 5 rocking a mostly all-screen displays (goodbye, bezels!). A punch-hole on the upper-left corner holds the front-facing camera, which is said to be a 12.2-megapixel sensor with an f/2.0 aperture and 84-degree field of view.

Around back, we see a square-shaped camera cutout, as is the trend these days. It houses a pair of 12-megapixel sensors (wide and ultra-wide), with the ultra-wide lens having an f/2.4 aperture and 120-degree field of view, aided by an LED flash.

According to the video, the Pixel 5 will feature a 90Hz QHD+ OLED display powered by a Qualcomm 765G processor, and will be capable of taking next-generation smart HDR photos. Pricing is said to be $699.
Whether the final product matches the concept, well, we can only wait and see.

Tags:  Google, (nasdaq:goog), pixel 4a
Show comments blog comments powered by Disqus
Follow Us:
FSR Or DLSS For The Win?