It's virtually impossible for a smartphone maker to keep its devices secret today as the supply chain is packed with sources looking to share information about unannounced devices. Sometimes details of products surface from manufacturers through mistakes that lead to order pages, and advertisements being posted early. The official Made by Google Facebook and Twitter pages were updated with a new cover image recently that, at first glance, may seem like a mistake. 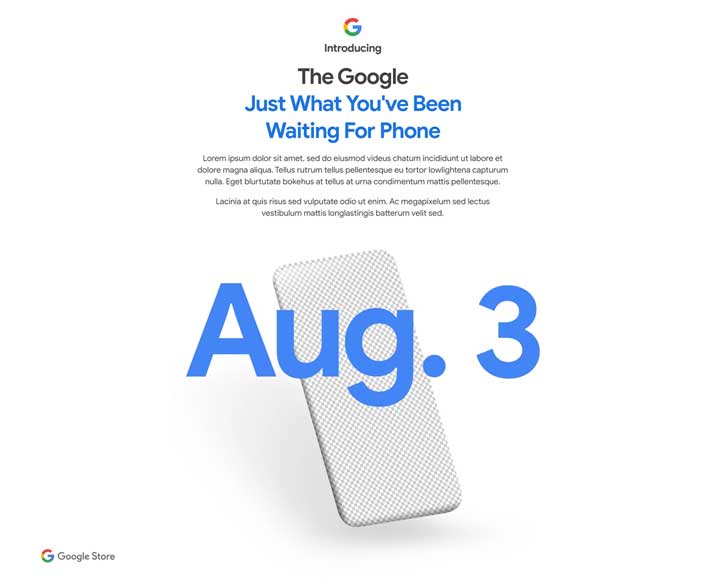 Anyone who visits that Google Store page will notice the gray boxes are clickable. If you click those boxes until the colors are in the Google logo color pattern - blue, red, yellow, blue, green, and red - you'll find an Easter egg that teases the launch date for the smartphone as August 3. The redacted text also materializes and reads "The Google Just What You've Been Waiting For Phone."

The checkered image representing the smartphone itself isn't uncovered. Some may overlook the text, thinking that it's merely Latin placeholder content. Sprinkled, along with those Latin words, are several words that could describe features of the device, such as a long-lasting battery, low light photography capabilities, and bokeh. It certainly an entertaining way to tease a smartphone that people have been anticipating for months. The Google Store landing page can be visited here.

A leak surfaced earlier this week that claimed the launch for the Pixel 4a would be next week. This new teaser confirms the launch for next week. Whether or not the device proves popular remains to be seen. If past leaked specifications prove accurate, it won't quite be a match for the iPhone SE or the OnePlus Nord on the performance front.