We still have a couple of months to go before Google formally introduces its Pixel 4a family, assuming it sticks to the same release schedule as the Pixel 3a, which was announced at least year's Google I/O event. Launch pricing might also be the same—rumor has it the Pixel 4A will start at $399, making it once again far cheaper than some premium phones that breach the $1,000 mark.
The current-generation Pixel 3a XL that we reviewed last year earned high praise from us as a full-featured, affordable phone delivering a pure Android experience. It is obviously too early to judge, be we are likewise holding out hope that the Pixel 4a is another ointment for the rash of ultra-expensive smartphones that have permeated the market in recent years.
Nothing has been confirmed in regards to pricing, but the billboard mock up above comes courtesy of Evan Blass, one of the industry's most reliable leakers. It is one of three mock ups he posted to Twitter with the caption, "Pays to keep your eyes open on a walk." Indeed it does, the same goes for perusing Twitter. 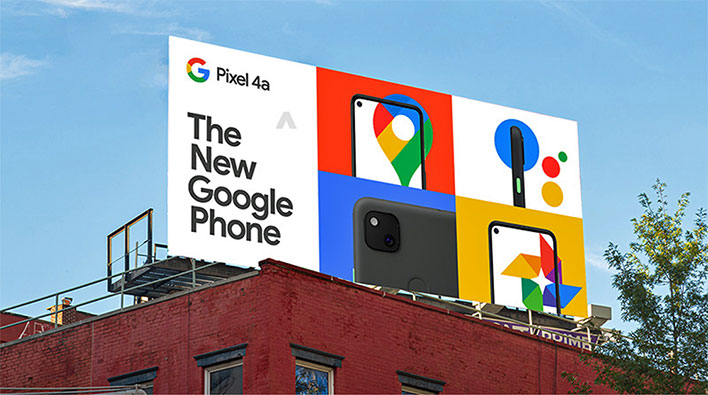 The other 'billboards' highlight a series of presumed press renders. We can clearly see a punch-hole design positioned in the upper-left corner of the display for the front-facing camera, and a square-shaped camera bump on the back that appears to house a single lens and LED flash. The images are consistent with past leaks, including supposed shots of the actual phone.
Blass did not divulge any hardware specifications or features. Based on previous leaks and rumors, the Pixel 4a is expected to arrive touting a Qualcomm Snadragon 730 SoC with 6GB of RAM and 64GB of internal storage. It's also said to house a 3,080 mAh battery.
Google I/O 2020 was originally scheduled to run from May 12-14. However, due to concerns arising from the coronavirus outbreak, Google canceled this year's event in physical form. There might be an online event in its place, though no details have been announced at this time.
Images Source: Evan Blass (via Twitter)

Tags:  Google, (nasdaq:goog), pixel 4a
Show comments blog comments powered by Disqus
Follow Us:
What Are You Playing Now?