Actual photos (read: not graphic renders) of Google's upcoming Pixel 4a smartphone have emerged on Twitter, and it looks...well, dirty. That's not the fault of Google, but the person who handled this phone, plastered it with finger smudges, and then thought, 'Hey, I should take some photos without wiping this thing down!', and so they did.
These are not the highest quality images in the world, either. I'm not in the business of leaking this sort of thing (not as the original source, anyway), so I can only assume there is a coalition of leakers who meet every month and have bylaws, one of which is to only post low quality photos, with copious blur. I also image there is a point system, and they can earn bonus points by taking photos in poor lighting.
My snark aside, at least we get a look at the Pixel 4a, assuming these photos are of the actual handset. Twitter user TechDroider posted them while crediting @raude2210.
On the rear of the handset, we can see the square-shaped camera bump and fingerprint sensor. By the looks of things, Google's budget handset will wield just a single rear camera lens, with an LED flash. And on the front, there is a punch-hole housing the selfie camera. It's positioned all the way on the upper-left corner. 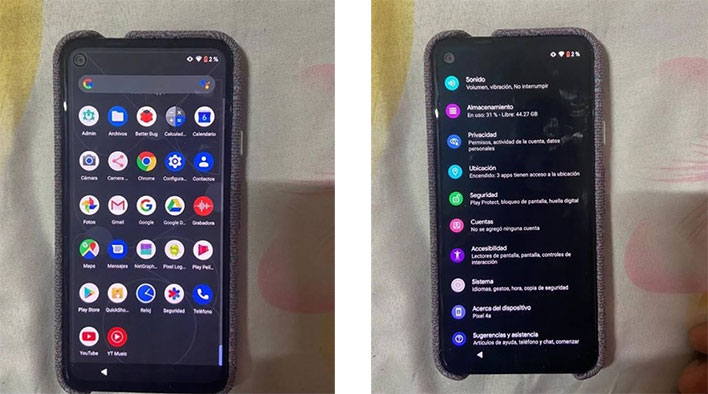 In a separate Twitter post, TechDroider posted more images highlighting the screen with the phone turned out.
"Google Pixel 4a... Small + Powerful Camera + Better Design than Pixel 4/XL," the user wrote.
The phone is housed in a fabric case similar to what Google offers for the Pixel 4 and Pixel 4 XL. Overall, the handset featured in the leaked images appear to be in line with past photos that have made the rounds online.
We can't know for sure, but rumor has it the Pixel 4a will feature a Qualcomm Snapdragon 765 processor, which is Qualcomm's first fully integrated 5G system-on-chip (SoC), courtesy of the Snapdragon X52 modem. That would be an interesting development—it means Google's budget Pixel 4a would boast 5G connectivity before the expected launch of the Pixel 5 and Pixel 5 XL.
When will the Pixel 4a make an official debut? Well, Google introduced the Pixel 3a as its Google I/O event last year. Google cancelled this year's gathering in physical form due to the coronavirus outbreak, which was set to run from May 12-14. We imagine it will hold some kind of online event in its place, but will have to wait and see.