Google Fi Is Getting A Major Privacy Upgrade With End-To-End Encryption, What You Should Know

Privacy and data security are always major areas of concern for everyone these days. Google Fi users are about to be given another tool for when they are talking on their Android phones.

Google has been one of the leaders in providing tools to its users for online safety and security (including its Pixel phones). To that end, it recently announced a new tool for parents and guardians of children under the age of 18 that allows them to remove images of minors from Google search results. In another nod towards user privacy, Google Fi, Google's phone network provider, is introducing end-to-end encryption for phone calls.

Messages by Google are already automatically encrypted in text message conversations, when both users have the Messages app and the settings enabled. This helps protect the content and data that is sent between you and the other user as it travels between devices. This can be very important for businesses whose employees may be sharing sensitive information through text conversations.

So, what is end-to-end encryption anyway? In simple terms it is a way to protect what you and the person you are talking to stays between the two of you. Without a decryption key, a hacker or snoop just sees a garbled mess of text. This new feature will be automatically in place for anyone who uses the Google Fi network. One important thing to note, however, is that both users must be on the Google Fi network for the feature to work. So if you are talking to someone on Verizon, you will not be protected with end-to-end encryption as of yet (there's still apps like WhatsApp for that).

If both users are on the Google Fi network, they will be notified by unique audio and visual cues to let them know they are protected. When placing a call you will hear a different ringtone than normal and see a lock symbol on the screen just before the call connects. Both users will see a lock symbol on their screen during the call, letting each know what they are saying is being encrypted. 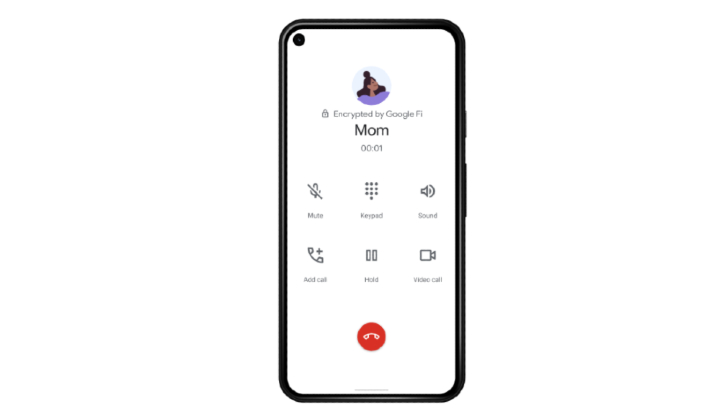 The end-to-end encryption feature will be part of Google Fi's phone plans. The plans also include a built-in VPN that protects you while you are online on your phone. Google Fi will also block spam callers along with any other unwanted calls. This will help ensure no one wakes you from your afternoon nap to ask about your car's extended warranty.

End-to-end encryption will begin rolling out to those on Google Fi in the coming weeks to protect any one-on-one phone conversations.