Google's original unlimited plan -- now called Unlimited Plus -- costs $70/month and gives you access to high-speed hotspot data for other Wi-Fi devices, 100GB of cloud storage with Google One, and international calling, texting, and data outside of North America. Simple Unlimited gets rid of all those extras in return for a $10/month discount. 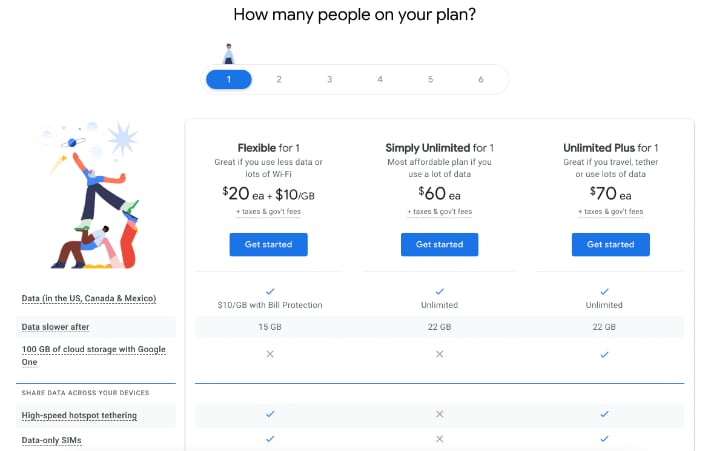 That seems like a lot to give up for just a $10 per month savings. The loss of hotspot functionality is a big bummer, and the 100GB of Google One storage alone is worth $1.99/month. If you don't travel much outside the United States -- which is most of us nowadays because of COVID-19 -- and you don't care about hotspot data, it may be worth going with the Simple Unlimited plan. Keep in mind, however, that even though it's called "unlimited," you'll still be throttled after you consume 22GB of data during your billing cycle (just like Unlimited Plus).

If you need just a single line, Simply Unlimited costs $60/month. For those requiring two lines, that price falls to $45/month per line and $30/month per line with three lines.

Google Fi still offers its original Flexible plan, which starts at a base rate of $20/month for a single line, plus $10 for each gigabyte of data that you consume. The base rate falls to $18/month for two lines and $17/month for three lines. Google Fi continues to use a mixture of Sprint, T-Mobile, and U.S. Cellular depending on which service provides the strongest signal in your current location.