Google already maintains a fairly rapid release schedule for its Chrome browser, but not fast enough, apparently. Instead of doling out new milestone updates every six weeks, Google plans to shorten the gap in between new browser version updates, to every four weeks. Buckle up folks and keep your arms and legs inside the vehicle at all times, this could get interesting.
If looking at the glass half empty, an accelerated release schedule opens the door up to bugs and quirks slipping through the cracks, and perhaps even security flaws. Especially during a pandemic when workers might not be firing on all cylinders, because of disruptive changes in everyday workflow. But let's stay optimistic, shall we?
Looking at the glass half full, Google is obviously confident its Chromium team is up to the task of releasing milestone updates a couple weeks faster than it has been, up to this point. Google says it wants to push out "new features more quickly," and if works out, that's great.
"For more than a decade, Chrome has shipped a new milestone every 6 weeks, delivering security, stability, speed and simplicity to our users and the web. As we have improved our testing and release processes for Chrome, and deployed bi-weekly security updates to improve our patch gap, it became clear that we could shorten our release cycle," Google stated in a blog post.
The actual reason might be more nuanced than Google is letting on. Microsoft's Edge browser has not presented much of a threat, in terms of market share, but that could change now that the Redmond outfit has overhauled Edge to run on Chromium, the same engine that power's Google's Chrome browser. Edge is pretty good these days, and keeps getting better (like adding tab and history syncing).

According to Net Marketshare's's data tracking, Edge is approaching an 8 percent stake in the browser market, having crept just slightly above Firefox. Chrome is still king with a greater than 69 percent share of the market, but there was a time when Internet Explorer boasted the same market dominance, and we all know how that eventually turned out. 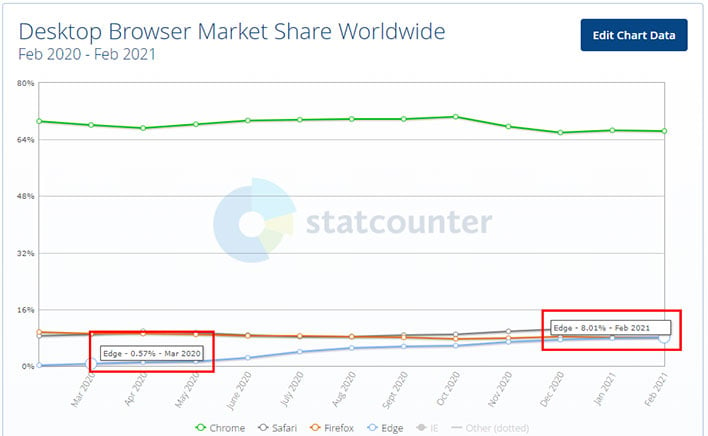 The gap is a teeny bit tighter if looking at StatCounter's data. According to that firm's data, Edge is just a tick above 8 percent, while Chrome is sitting at 66.47 percent. Edge's share is way up from a year ago—it was barely a blip on the radar with a 0.57 percent share of the browser market in March 2020.
Who cares, right? Well, the browser makers do, because market share can be lucrative. Google and Microsoft (Bing) have a vested interest in having their respective search engines be the driving force on the web, which in turn generates advertising dollars. They can also influence web standards.

But that is getting into the business side of things. As it pertains to users, Google's accelerated update schedule, which goes into effect starting with Chrome 94 in the third quarter of this year, will result in a better ongoing browser experience. Or so we hope.