Good News, GeForce RTX 3050 Cards May Actually Be Obtainable At Launch This Month

If you’re anxiously awaiting NVIDIA's new affordable GeForce RTX 3050 series but were skeptical you'd ever see one, we may have a reason to take heart. The word on the street is that NVIDIA has a large stock of the budget RTX 30 series GPUs making its way to graphics card manufacturers. It may not be as powerful as the GeForce RTX 3060 or 70 series, but this new model will still get the job done for 1080p gaming with hardware ray tracing and DLSS support.

Various media outlets in China report NVIDIA is offering a larger supply of the RTX 3050 series than the RTX 3060 and 3060Ti. ASUS, EVGA, MSI, Colorful, and other manufacturers have announced their entries in the RTX 3050 catalog, which are available in models featuring one, two, or three axial fans. 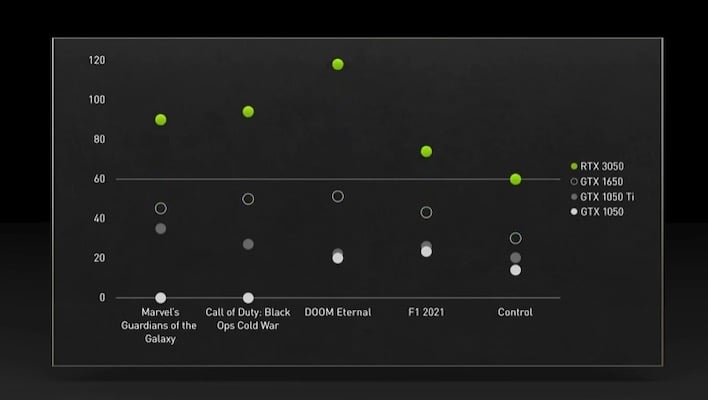 Performance, from NVIDIA’s competitive comparison, show the card providing frame rates nearly or more than double that of the GTX 1650 in Marvel’s Guardians of the Galaxy, Call of Duty: Black Ops Cold War, DOOM Eternal, F1 2021, and Control. Other leaked specifications, similarly, show the card handles gaming quite well for a budget entry.

The card comes supports PCIe 4, requiring 130W of graphics card power and 550W of system power. Shipments of the new card should be available January 27th and if the reports are true, you might actually be able to buy one. Currently, NVIDIA lists the MSRP for the RTX 3050 starting at $249 USD, but who knows if that'll hold up at retailers.