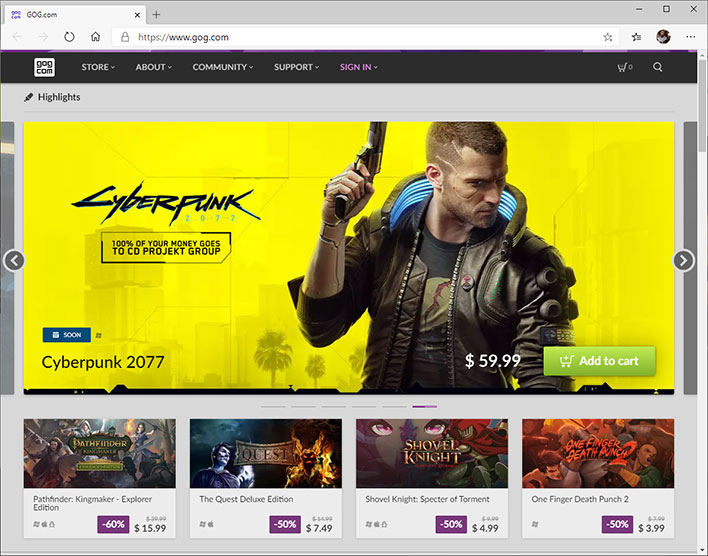 The folks at GOG just changed their refund policy for game purchases, but don't worry, it is for the better. Effective immediately, customers have up to 30 days to request a refund for game, even if they have played it for several hours. In fact, there is no time restriction at all—if a purchase is 30 days old or less, it is eligible for a full refund, simple as that.
"Everyone at GOG believes in a 'gamers-first’ approach. It means that every part of our store is designed with gamers in mind and your purchase safety and satisfaction come first for us. The latest update to our voluntary refund policy adds another piece to this customer-friendly experience. And it all sums up in one sentence: starting now, you can get a full refund up to 30 days after purchasing a product, even if you downloaded, launched, and played it. That's it," GOG says.
This is leaps and bounds more generous the refund policies offered by competing digital game store fronts and launchers, including Steam and Epic Games Store. Both Steam and Epic Games Store allow return requests to be made within 14 days of purchase, which is less than half the time GOG allows, and only if a game has been played for no more than 2 hours.
Will Steam and Epic Games Store follow in GOG's footsteps? I have my doubts. GOG is taking a risk with its updated terms. There are some games that can be completed within 30 days, which leaves the door open for an unscrupulous gamer to play through a title and then get their money back.
To protect against these situations ruining the fun for everyone, GOG says it reserves the right to refuse refunds on a per case basis.

"We're monitoring the effects of the current update to make sure no one is using this policy to hurt the developers that put their time and heart into making great games. We may refuse refunds in such individual cases. We'd also let you know about any future adjustments in the voluntary refund policy in advance," GOG says.
We'll see how this pans out. GOG is not imposing any limits on its return policy, so in theory a gamer could continually purchase titles, play them through, and return them for a refund. In practice, continued returns in such a manner will likely trigger GOG to put its foot down and deny refund requests.
GOG also encourages users not to treat the revised return policy as excuse to get a refund if a user ends up not liking a game after having played through it.

"Please respect all the time and hard work put into making the games you play and remember that refunds are not reviews. If you finished the game and didn't like it, please consider sharing your opinion instead. Also, please don't take advantage of our trust by asking for an unreasonable amount of games to be refunded. Don't be that person. No one likes that person," GOG says.