Gigabyte is facing some harsh criticism from Roman "der8auer" Harting, an extreme overclocker and the CEO of HWBot, over the company's recent chest-thumping at its Z690 Aorus Tachyon motherboard being used to push an Intel 12th Gen Core i9-12900K Alder Lake processor all the way to 8GHz. According to der8auer, it's a fake result, and Gigabyte's promotion of the supposed record overclock is "very disrespectful" the extreme overclocking community at large. Oh, my!
That's just a snippet of the harsh words and overall accusation der8auer lobbed at Gigabyte, as well as overclocker HiCookie, who was the one who overclocked the Alder Lake CPU to 8GHz (and subsequently promoted it on hits Twitter account). So what's all the fuss?
On social media and in a press release, Gigabyte claimed a return to "overclocking glory" after its Z690 Aorus Tachyon helped set "world-leading overclocking records of dual 8GHz," hitting the extreme frequency on both on the Core i9-12900K (8,000MHz on the nose) and a single 16GB DDR5, which was goosed to DDR5-8300. 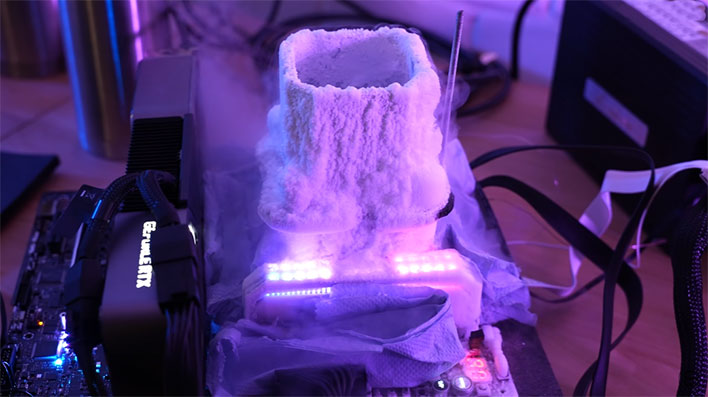 This obviously required the use of liquid nitrogen (LN2), but that's not der8auer's beef, as exotic cooling is almost always used for this sort of thing. Instead, he's accusing of HiCookie with exploiting CPU-Z and obtaining a "bugged" validation.
"I'm very mad, and I have to think about what I'm saying because it's not even the first time Gigabyte is doing this," der8auer begins his chastising. "It happened before with 5950X, where the CPU-Z verification was bugged. We also showed in the launch video that it was bugged."
What he's referring to was an old issue in CPU-Z that could validate results that shouldn't be validated. This was fixed, according to Doc TB, the developer of CPU-Z Validator, but another apparent issue cropped up ahead of Alder Lake's launch. He describes it on Twitter as a silicon errata bug when the ratio is set above 63, leading to "many 8/9/10/12+ GHZ fake 'overclocking' [results] on early Alder Lake samples." 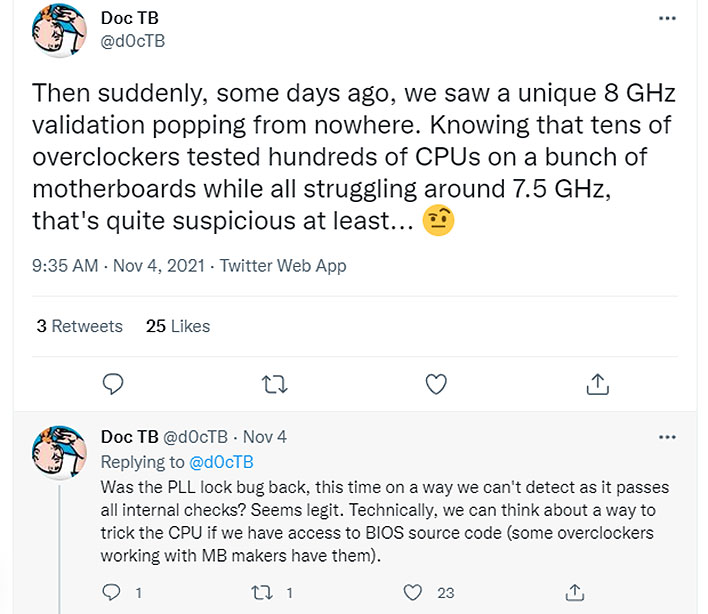 This too was fixed, but according to Doc TB, overclockers with access to a motherboard's BIOS source code could still exploit the utility and bypass certain checks, thereby obtaining what he and der8auer are calling fake overclocking results. You can check out the full Twitter thread for a longer explanation, but that's the gist of it.
In a video showcasing an overclock of his own (using a random retail Core i9-12900K chip (as opposed to one that's been cherry-picked), der8auer says he knows for a fact that Gigabyte was aware its 8GHz claim was based on a bugged overclock that shouldn't have been validated. According to der8auer, Gigabyte was in close contact with other overclockers and the CPU-Z team, so there's no way it couldn't have known.

He also claims Gigabyte broke Intel's NDA by posting the overclocking result a day before Alder Lake's launch to give it a buffer before other videos could be posted, knowing they would be "bashed hard" when published.
"It's very, very disrespectful to any other extreme overclocker out there who has spent days and weeks working on these results for launch," der8auer said, adding that he's "really mad" at both Gigabyte and HiCookie.
"This is not only hurting your own marketing, but it is also hurting the entire extreme overclocking community and that is not something I cannot accept," der8auer said. "Being part of HWBot, we will also investigate this further and if any of results will be submitted to HWBot, it will probably lead to a lifetime ban."
He ends the video by saying he and the HWBot team will look into this further, and that he's lost for words. It's the most frustrated we have ever seen der8auer, who is typically calm, cool, and collected. And he still is for the most part, but very obviously upset.
The full video is worth checking out if you have a little over 19 minutes to spare. But if you want to skip right to the lambasting, skip to around the 15-minute mark (or a couple minutes before, for some backstory).