One of the more reliable sources for leaked information on unannounced graphics cards is the Eurasian Economic Commission (EEC) website, as companies register their products in anticipation of a pending launch. So what does the EEC website reveal to us today? According to a recent listing by Gigabyte, we have semi-confirmation that AMD's upcoming Radeon RX 6700 XT will ship with 12GB of GDDR6 memory, as previously rumored.
Of course, nothing is ever truly confirmed until it is real, or in this case, until AMD says so. But in lieu of those things, these types of leaks will have to suffice. That said, this one is not hard to believe—the information in the listing is in line with prior leaks, and it stands to reason that the Radeon RX 6700 series is next on AMD's RDNA 2 roadmap.
Here's a look at the listing in question... 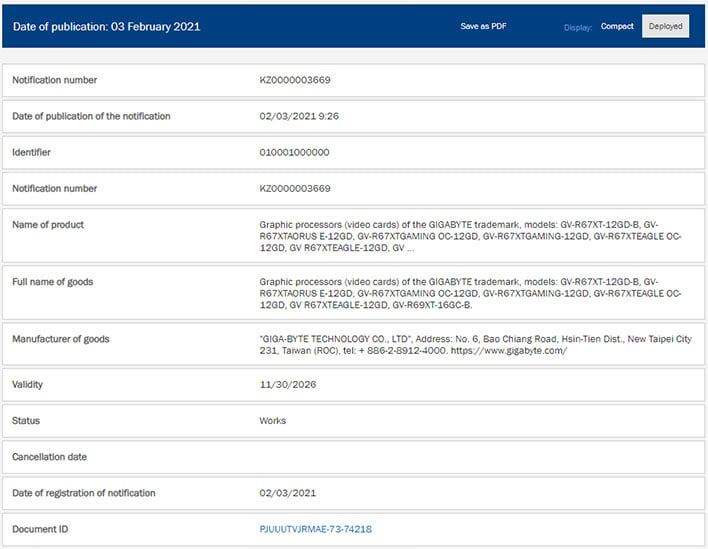 Assuming this is accurate, Gigabyte is getting ready to release at least half a dozen Radeon RX 6700 XT models, under its Aorus, Gaming, and Eagle brands. Here's how it breaks down...
This may or may not be a full list of SKUs that Gigabyte plans to unleash. Nevertheless, the model names are a clear indication of the amount of memory, as well as Gigabyte's plan to offer both stock clocked and factory overclocked variants.
Past rumors indicate the Radeon RX 6700 XT will be built around AMD's Navi 22 XT GPU, with 40 compute units and 2,560 stream processors, along with a 192-bit memory bus. Clockspeeds are not yet known.
As a point of comparison, the Radeon RX 6800 features a Navi 21 XL GPU with 60 compute units and 3,840 stream processors, with a 2,105MHz base clock. It also employs 16GB of GDDR6 memory (16Gbps) on a 256-bit bus, and has a 250W TDP.
Rumor also has it the Radeon RX 6700 XT will handily crush the GeForce RTX 3060, and offer performance on par with (or perhaps even better than) a GeForce RTX 3060 Ti. We'll find out soon enough—AMD is expected to launch the Radeon RX 6700 XT next month.