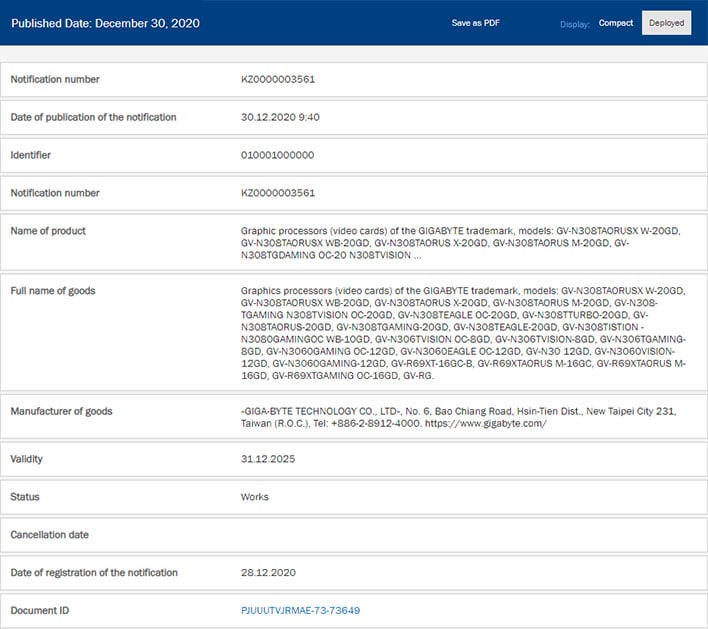 The notable sections are in the middle, under the "Name of product" and "Full name of goods" categories. Published today, it shows that Gigabyte registered a bunch of GeForce RTX 3080 Ti models under its Aorus Master, Aorus Xtreme, Eagle, Gaming, Turbo, and Vision brands. It is a bit of a jumbled mess, but I count 13 models, including one that purportedly has 10GB of video memory.
That is likely a typo. Every other model is listed as having 20GB of onboard memory, which is consistent with past leaks and rumors. For reference, the non-Ti version has 10GB of GDDR6X memory paired with a 320-bit bus, for 760.3GB/s of memory bandwidth.
It seems part of the reason for releasing a GeForce RTX 3080 Ti is to close the memory gap between it and AMD's Radeon RX 6000 series, all of which currently feature 16GB of GDDR6 memory.
The registration form also includes a spattering of regular GeForce RTX 3060 models. I count seven models in total, spread out between Gigabyte's Eagle, Gaming, and Vision brands. Looking at the model numbers, both cards include stock clocked and factory overclocked SKUs.
While the leaks essentially confirm the memory arrangement on the upcoming cards, it remains to be seen what the other specifications will look like, including the number of CUDA and RT cores, clockspeeds, and bus widths.