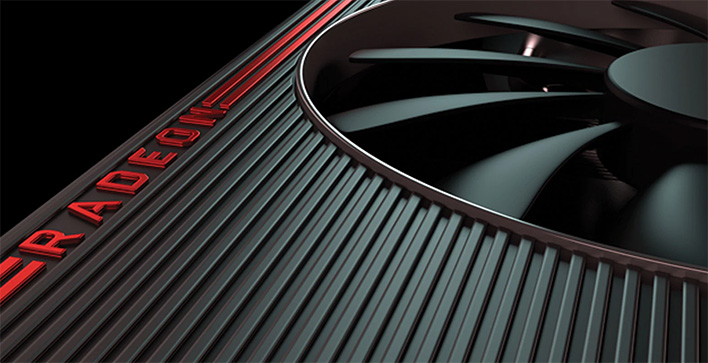 Big Navi is coming, we have known that for quite some time now. Questions remain, obviously, such as how will it perform compared to NVIDIA's offerings, and where will pricing end up? Those will be answered in due time. For now, we are left to scour the alleyways and side streets in Leakville and Rumor Township, and to that end, some preliminary benchmarks have emerged.
They come from a popular destination for this sort of thing—the Ashes of the Singularity database. One of the latest entries shows performance results for an "AMD Radeon Graphics" presumed to be from AMD's upcoming Radeon RX 6000 series, running at the Crazy 4K preset. It is situated in a testbed with an Intel Core i9-9900K processor and 32GB of RAM.

At its peak, the card posted a cumulative average of 63.9 frames per second among the three batch runs (normal, medium, and heavy), for a score of 6,200, as shown above.

There are multiple benchmark runs posted by the same user. On the low end, the mystery card averaged 59 frames per second, for a score of 5,800 at the same Crazy 4K preset. How does that compare to NVIDIA's offerings? Let's have a look... 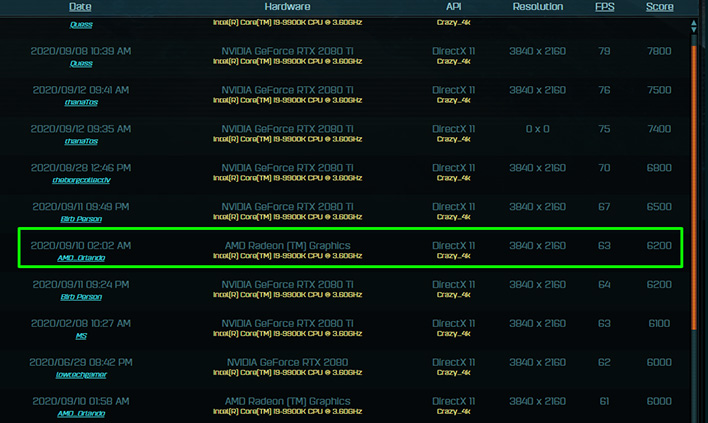 If we focus on the best showing by the mystery Radeon RX 6000 part, it performs roughly in line with the lower scores posted by a GeForce RTX 2080 Ti, in this particular benchmark.
To make the comparison as fair as possible, we limited the sorting to test runs with a Core i9-9900K, at the same resolution and same DirectX 11 setting. However, there are all kinds of variables that can affect scores, when the testbeds and are different.
It is also worth noting that AOTS might not be the best indicator of performance. We have not done a deep dive into this benchmark (perhaps we should at some point), but in looking around the web, we spotted a review of a Radeon RX 5700 XT that shows it outpacing a GeForce RTX 2080 Super in AOTS at 4K. In reality, the GeForce RTX 2080 Super is the overall faster card at any resolution.
That said, in one of the Twitter threads discussing the latest AOTS benchmark leaks, prominent leaker @_rogame points out that both Navi 21 and Navi 22 are coming, and only one of them is Big Navi.
"Navi 22 SKUs should compete with 3060 Ti / 3070 / 3070 Ti. Navi 21 SKUs should compete with 3080 and up," he says.
If the leaked results above are from a Navi 22 part, then performance parity with a GeForce RTX 2080 Ti is fine. But if those scores are Big Navi (and the results prove to be an accurate reflection of performance), then NVIDIA will retain the performance crown for another round. We'll have to wait and see, though.

Take all this with a giant heap of salt, as you should usually do when looking at leaked benchmarks. Fortunately a launch is right around the corner. AMD plans to announce its Radeon RX 6000 series during a press event on October 28.