Motherboard makers right now are collectively like, 'YOU get a BIOS update, YOU get a BIOS update, YOU get BIOS update', and, well, you get the idea. The reason for the influx of firmware upgrades is to get today's existing platforms ready for tomorrow's CPUs, those being Intel's next-gen Raptor Lake lineup sporting drop-in compatibility with Alder Lake.
Raptor Lake is not literally releasing "tomorrow," by the way, but before the end of the year. Intel has not yet announced an exactly release date, but given that four major players in the motherboard market are either already pushing out updated firmware to support Raptor Lake or soon will be, a formal launch isn't likely all that far behind.
As we previously reported, ASRock, ASUS, and MSI have all begun rolling out BIOS updates for existing 600 series motherboards, and now Gigabyte has announced it will follow suit sometime soon. this presumably includes its Aorus branded motherboards (sort of akin to the Republic of Gamers division at ASUS).
"Gigabyte has been working closely with Intel to provide users the optimal performance, compatibility, and user experiences. Along with the coming new generation Intel Core processors, Gigabyte R&D team has prepared well-verified BIOS code exclusively for Z690, B660, and H610 motherboards. This ensures users a perfect articulation for platform upgrade once the new processor hit the market," Gigabyte states.
What's interesting is that all four aforementioned motherboard makers reference support for Intel's next-gen CPUs, but none of them specifically say "13th Gen" or "Raptor Lake" in their announcements. Perhaps that's at the guidance of Intel, though even Intel has publicly talked about Raptor Lake on multiple occasions. 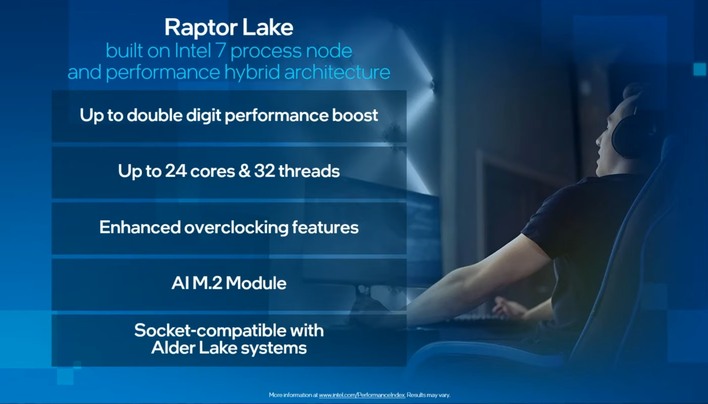 Regardless, we know that's what these BIOS updates are meant to address. According to Intel, Raptor Lake will deliver up to a double-digit performance boost over Alder Lake. Part of that will come by way of doubling the number of E-cores at the top end, with Raptor Lake being offered in up to 24-core/32-thread configurations consisting of 8 P-core and 16 E-cores.
Intel has also referenced "enhanced overclocking features"  and an AI M.2 module, which will be some sort of AI compute accelerator that slots into an M.2 socket.
Raptor Lake will be the last to use the Intel 7 node as it shifts to Intel 4 for Meteor Lake in 2023, Intel 20A for Arrow Lake in 2024, and Intel 18A for Lunar Lake.