What can be viewed as another sign that Intel's 13th Gen Core processors based on Raptor Lake are not too far around the bend, ASUS has announced BIOS updates for nearly two dozen of its 600-series models to support the next-gen CPUs. They're all based on Intel's Z690 chipset, though we imagine other 600-series models won't be far behind.
We say this because, as we wrote about last week, ASRock has also gotten a jump on Intel's next-gen processors with BIOS updates of its own. ASRock has made available BIOS updates for a bunch of its Z690 motherboards, but also several H670, B660, and H610 boards as well. In total, there are 46 ASRock motherboards that already support Raptor Lake.
By our count, ASUS upgraded 23 of its Z690 motherboards "for a new wave of Intel CPUs." Like ASRock, ASUS doesn't specifically mention "Raptor Lake" or "13th Gen," but does implicitly indicate that its latest firmware releases "support the next-gen Intel processors." That could only be Raptor Lake.
Here are the boards that are ready for Raptor Lake... 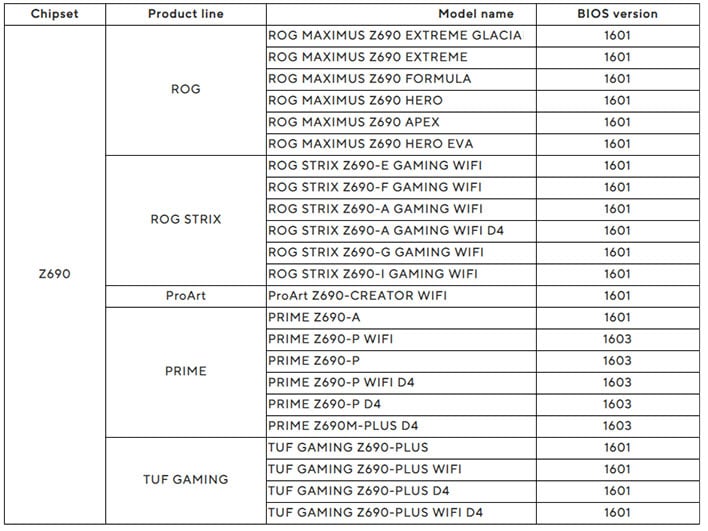 Some things to note here. Bear in mind that when updating the BIOS, you may need to re-input any custom settings. Save profiled could be wiped too, though you can get around that by exporting them to a USB drive and then importing them back after you've updated. That said, if you plan on upgrading to Raptor Lake on one of these boards, you'll want to have the BIOS in place first.
The reason you can do this is because Intel confirmed that Raptor Lake will be drop-in compatible with existing Alder Lake motherboards. You'll miss out on whatever upgrades Intel's inevitable 700 series chipsets bring to the table, but a platform overhaul won't be necessary if you're already running Alder Lake.
Intel has also confirmed that Raptor Lake will go up to 24 cores and 32 threads at the top end, compared to Alder Lake maxing out at 16 cores and 24 threads. Those additional cores on Raptor Lake are E-cores, with top configurations offering 8 P-cores and 16 E-cores (the former of which support Hyper Threading).
Raptor Lake will deliver a double digit performance increase over Alder Lake, Intel claims. In addition, Intel is touting "enhanced overclocking features" with its next-gen CPUs.