GeIL is laying claim to launching the world's first DDR5 memory kit with active cooling. Its new Evo V DDR5 memory kits come with a sort of industrial looking heatsink with a pair of minuscule RGB fans positioned in the top left and right corners. According to GeIL, this dual-fan cooing system "drastically" increases heat dissipation to keep those memory chips cool.
Builders can choose between two color options, titanium gray and glacier white. Both come with the itty-bitty fans, which are part of the one-piece heatspreader design. Our concern would be that if either fan fails, there would be no easy way to replace it. But hey, we suppose that's where the warranty would come into play. 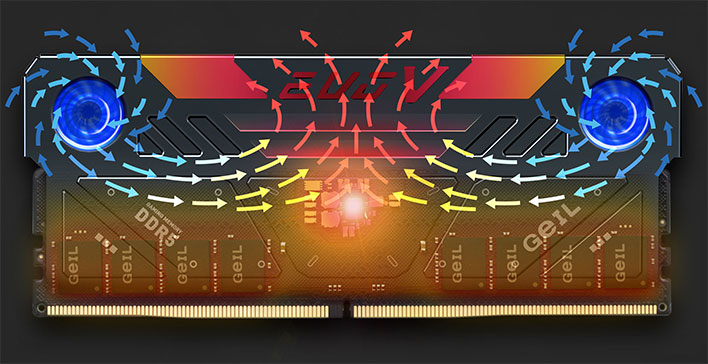 Our concern aside, GeIL says the added height needed for these fans won't prevent the kits from working with most CPU coolers on the market today. Additionally, GeIL is claiming a substantial 45 percent improvement in thermal dissipation compared to a traditional heatsink (sans fans).
Quite frankly, it's a bit early in the game for us to consider whether active cooling is a gimmick or not, as speeds ramp up. For the most part, it hasn't been needed for DDR4, but DDR5 is a different beast. It's not just faster, it also incorporates some key changes, such as on-die power management integrated circuit (PMIC) and voltage regulation modules (VRMs), rather than tasking the motherboard with handling it all.
Corsair talked about this last summer, saying at the time that DDR5 could conceivably run much hotter, potentially requiring better cooling. Not necessarily fans, mind you, but here we are anyway. 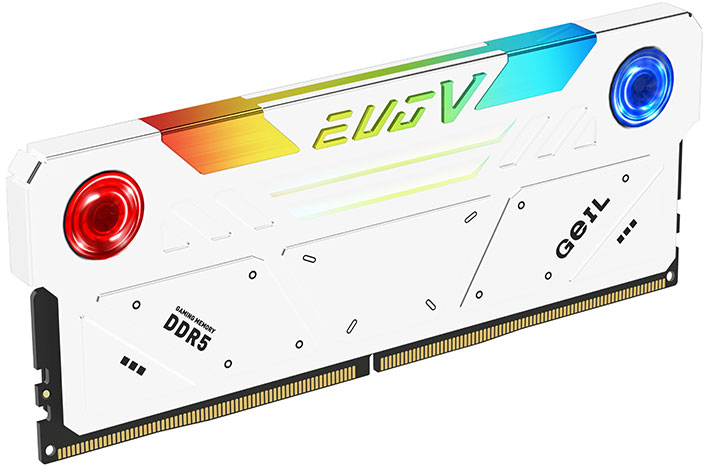 GeIL's plan is to release 32GB (2x16GB) and 64GB (2x32GB) kits in speeds ranging from 4,800MHz (technically MT/s) to 6,600MHz. We're only getting a high level overview at the moment, but the CAS latency on these kits will be 34 to 40. There will also be a range of voltages, from 1.10V to 1.35V.
The actively-cooled kits are slated to arrive to July. Assuming that includes DDR5-6600 memory kits and actual availability, these could be some of the fastest RAM at retail. Even faster RAM has been announced (G.Skill unveiled a 32GB DDR5-6800 Trident Z5 in October of last year), but in terms of what's on the market, there are couple of backordered DDR5-6600 kits on Newegg, and some DDR5-6600 kits at Newegg and Amazon.