An unbranded NVIDIA GeForce RTX 4090 built into a blower-style cooling shroud has been put through a handful of tests by a PC enthusiast. Redditor BottleneckEvader shared a variety of images of the graphics card, a few sys-info screenshots, and a pair of 3DMark tests. His summary is that this 2-slot curiosity might run loud and hot by default, but he is pleased with the reference-like performance despite its steep price. 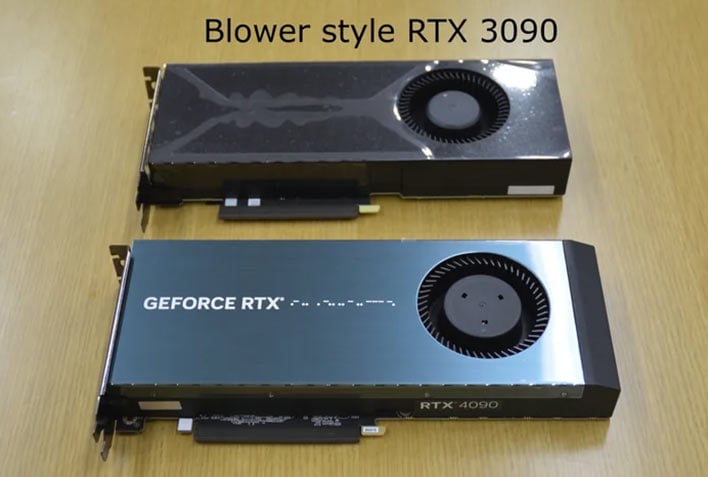 In addition to great performance and a thirst for watts, the RTX 4090 has a reputation for serious physical bulk—pushing the limits in all dimensions. NVIDIA partner designs are generally even bigger than the tank-like reference, so PC upgraders and DIYers have to very carefully check their case maximum compatibility figures when shopping for the Ada Lovelace flagship. A little leeway needs to be factored in for the melt-prone power connector (sensitive to fit/and bends) too.

Some would naturally welcome a 2-slot blower design, but NVIDIA partners appear to have been warned off making such a beast, and thus we are seeing ‘white box’ models like this one bought by BottleneckEvader and the design we featured in an article just ahead of the New Year. The Japan-based Redditor spent the equivalent of $2,740 USD on the unbranded RTX 4090, to fit in his Fractal Torrent Nano case PC. That's more than a grand over the RTX 4090 FE's MSRP. 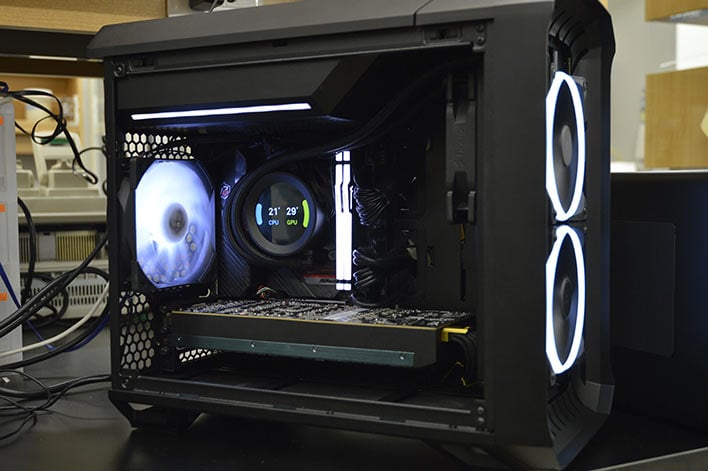 It is very interesting to see these independent tests and assessments of an RTX 4090 in a blower shroud. With AIBs not willing to put their branding on these models, readers won’t be surprised that they aren’t being offered up to HotHardware labs testing either. If you are wondering, the dots on the side of the card are Morse Code for “AI Edition”. NVIDIA might not be keen on these models as it would prefer to sell (even more) expensive professional RTX cards (formerly Quadro) to researchers and content creators.
Beginning with the basics, this graphics card has NVIDIA as the subvendor ID in the VBIOS, but this might not be a smoking gun indicating that it is a secret ‘reference model’. In the intro, we mentioned the potential problem of fan noise, inherent to such a design. The Redditor admits that under heavy load with the fan hitting 5,200RPM it can be “very loud.” At the same time, temperatures of the GPU and VRAM were uncomfortably high. However, BottleneckEvader says he has adjusted the fan curve and is now happy with the temps and performance achievable. 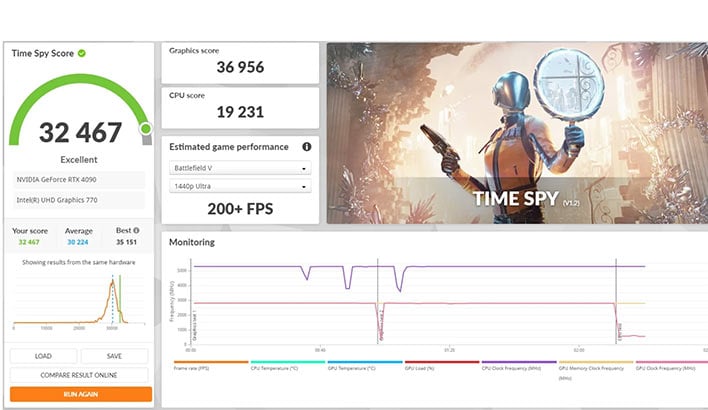 The card is locked to a maximum 450W TDP and the 3DMark performance tests showed it performed surprisingly well. A graphics score of 35,908 was achieved with stock settings in 3DMark Time Spy, and with some minor GPU/VRAM overclocking it could reach 36,956. These results fit within the realms of what would be expected of reference and AIB produced RTX 4090 models. The average Time Spy graphics score for all the RTX 4090 cards tested and saved on UL Benchmarks is 35,975.