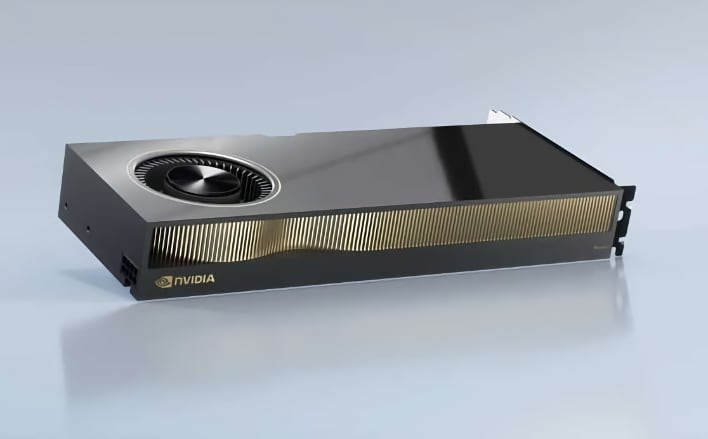 Say it ain't so, NVIDIA. It looks as though Quadro branding for its professional GPUs is being thrown out the window, as the company is adopting new nomenclature for its Ampere-based solutions. The company today announced the RTX A6000, which is the replacement for the current-generation Quadro RTX 8000 and RTX 6000 GPUs based on Turing architecture.

NVIDIA says that its second-generation RT cores provide a 2x uplift in throughput over the previous generation Turing-based Quadro cards and a 5x improvement in throughput for its Tensor cores.

“Creating the next generation of passenger cars requires design perfection and a relentless pursuit of aesthetic beauty,” said Guillaume Shan, who works in Computer Graphics and Visualization Solutions at Groupe Renault. “The Renault design team constantly pushes the boundaries to use every tool at our disposal. We have always relied on NVIDIA technology to review design concepts in ray-traced photorealism. The new NVIDIA RTX A6000 has exceeded our expectations and shown performance gains of over 2x with ray-traced exterior scenes. It’s quite impressive.”

We should also mention that NVIDIA will introduce the largely similar A40, which is specifically geared towards the data center market (even though it includes three DisplayPort connectors, which is a new development for computer cards). While the RTX A6000 is actively cooled, the A40 is passively cooled. The A40 also features slightly slower memory, which clocks in at 14.5Gbps. Both cards feature a TDP of 300 watts and are 2-slot solutions.

NVIDIA says that workstations with RTX 6000 and A40 will begin shipping in early 2021 from companies like BOXX, Dell, HP, and Lenovo. Likewise, individual cards will be available from channel partners starting in mid-December.