If you've been trying to get a GeForce RTX 3000-series graphics card, been unsuccessful, and decided at this point to just wait for next-generation, well—you probably better have a real beefy power supply. We've reported on similar rumors before, but this one is even more concerning.


Simply put, oft-seen Twitter leakers Greymon55 and kopite7kimi are both saying that NVIDIA's next-generation AD102 GPU, based on the Ada Lovelace architecture, could have a total graphics power of 800-850W on the absolute top-end model. More specifically, kopite7kimi says that the AD102 GPU could be used for the RTX 4080, 4080 Ti, and 4090 with TGP specifications of 450W, 600W, and 800W respectively. 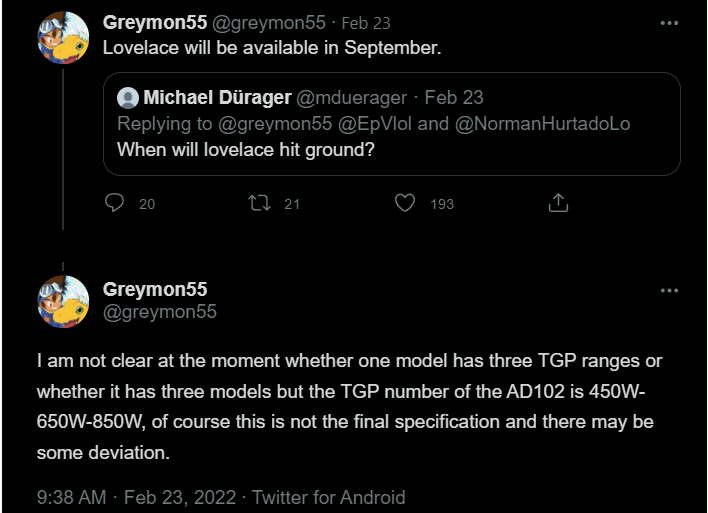 Before we go any further discussing this, we should note that Greymon55 says they are "not clear" on this information, and that kopite7kimi specifically says that the source of that rumor's credibility is about "50/50." So saying, this information could be inaccurate. The fact that both leakers have heard it, though, does make one wonder about the veracity of the rumor.


A range from 450W to 800W might seem extremely wide, but Greymon55 says that they don't know if the numbers are for a single chip's three TGP ranges, or whether the numbers could be for three separate models. A chip that tops out at 800W could easily be limited in various ways (whether by reducing clock rate or shutting off parts of the chip) to hit a mark over half of its power spec, so even if it's three models, they could still be using the same chip.

The real worrying part of this news is that even the brand-new PCIe 5.0 power connector only supports 600 watts over a single plug. If this rumor is true, then we could see a pair of PCIe 5.0 plugs on NVIDIA's top-end Ada Lovelace product. However, the more likely story is that the top-end power spec is only for professional parts based on the same GPU. While we know that NVIDIA has Hopper targeting the top-end professional market, it seems likely that the company will sell professional accelerators based on Ada Lovelace, too.

So saying, that 800-850W spec, even if it is legitimate, probably only applies to parts that will ship with mezzanine connectors and exotic cooling inside supercomputers or other massive servers. It seems likely to us that the halo product of NVIDIA's next generation will simply max out the PCIe 5.0 connector. Even 600-650 Watts will require some interesting cooling, though.

The other bit of news from these leaks seems to be more concrete; Greymon55 outright states (with none of the hedging of the other details) that Ada Lovelace will appear in September. That lines up with earlier leaks implying that the parts would appear in Q3, but it's a little more specific. September seems like a long time to wait, but as older Hot Hardware readers know, it'll be here before you know it.