GameStop Is Selling Doom Eternal Early Due To COVID-19 Guidelines, Say No To Lines Get It Now 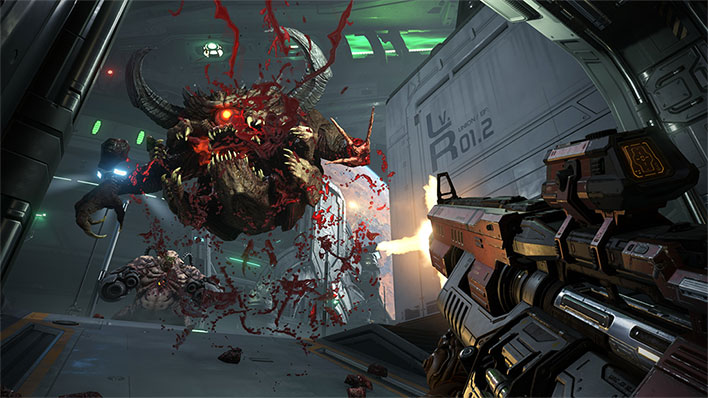 In many places, you can't walk into a movie theater and catch a flick or waltz into most restaurants for a meal (it's delivery or pick-up only), but you sure as heck can march yourself into GameStop. Well, for now, anyway. There has been a call for 'social distancing' in light of the coronavirus pandemic, and while GameStop has not yet closed its stores, the retailer has decided to sell Doom Eternal today, a day before it is scheduled to release.
"To ensure we adhere to CDC-recommended social distancing guidelines, we will be selling Doom Eternal a day early on Thursday, 3/19 as a safety precaution for our customers and associates. Animal Crossing will release on Friday 3/29 to further help separate crowds," GameStop announced on Twitter.
Doom Eternal and Animal Crossing: New Horizons are two highly anticipated games, and with an increasing number of people being sent home, demand could be even higher. If GameStop is going to remain open either way, then it's a sound decision to release one of the titles a day early. But did GameStop choose the right game?
Some of the reactions to GameStop's Twitter post are humorous. One user noted, "GameStop has firmly picked a side in the divorce," while another user tweeted, "Think about the children."
The same-day release for Doom Eternal (PS4, Xbox One, Stadia, and PC) and Animal Crossing: New Horizons (Nintendo Switch) has linked the titles and led to a barrage of memes and crossover fan art. It has even attracted the attention of those involved with each game.
"I definitely do notice and have noticed that there’s a lot of Doom and Animal Crossing collaboration art and illustrations that are being posted, and as I look through them I’m in awe of how much creativity our fans have," Animal Crossing: New Horizons director Aya Kyogoku told IGN. "I think because there is a common denominator of this type of communication happening between Doom and Animal Crossing fans, and also the fact that Animal Crossing is a communication game."
Animal Crossing: New Horizons producer Hisashi Nogami echoed Kyogoku's statement.
"So Animal Crossing and Doom— obviously the game genres are completely different. We definitely do have something in common, and that is that they’re both video games, and come from that same subculture so to speak. It’s so great to see that these two different [fandoms] are coming together and hyping up the gaming [community] and gaming culture itself. It really is a great thing to see," Nogami said.
Fans of Doom are obviously happy with the decision, while gamers who have been eagerly awaiting the new Animal Crossing title feel it should have been released first. Which side of the fence do you fall on?
For those of you who are planning to buy Doom at GameStop, you can find the game at the following links...