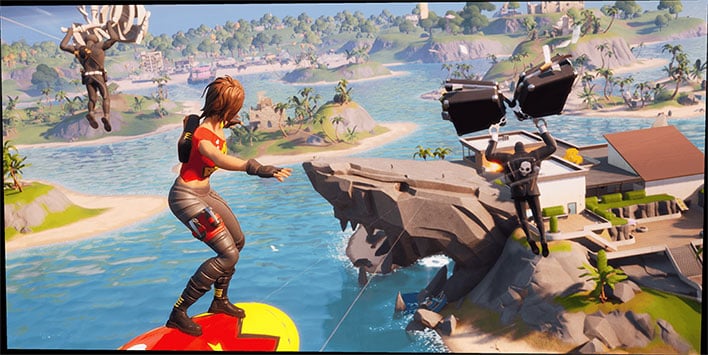 Epic Games announced it is delaying the release of Fortnite Chapter 2 Season 3 by a little over a month, though the reason is not entirely clear. The first thing that comes to mind is the Coronavirus pandemic, and perhaps it is just not feasible to polish up the update in time for its original April 30 release. Whatever the cause, the new release date is June 4.
That means Chapter 2 Season 2 is getting a bit of an extension. While some Fortnite players might be disappointed with the delay of the upcoming Season update, Epic Games says "there's lot of content coming in the current Seasons," with multiple game updates on the horizon "that will deliver fresh gameplay, new Challenges, bonus XP, and a couple more surprises" it has up its sleeve.
It is very like that the spread of the COVID-19 virus is the reason for the delay. Working from home is quickly becoming the norm these days, but the team responsible for Fortnite might not have access to same resources. Epic Games might also feel that with the sudden influx of players as of late, there is no need to rush out a new Season.
That is all speculation on our part, though, and only Epic Games knows why Season 3 will not arrive as originally scheduled.

An interesting to side note to all this is the emergence of criticism from popular streamers, including Ninja and SyperPK. Both have taken to social media to call out Epic Games for letting Fortnite sort of become stale, in their opinion. SypherPK got the ball rolling by uploading a "pretty serious video" on the matter (see above), which prompted a response by Ninja, who largely agreed with this assessment.
dddd
"Wow @SypherPK ‘s most recent video really hits hard. I love Fortnite so much and really wanna see the game thrive again and be goofy and fun in regular matches. Would really bring back the streamers and YouTubers we all miss," Ninja stated on Twitter.

Wow @SypherPK ‘s most recent video really hits hard. I love Fortnite so much and really wanna see the game thrive again and be goofy and fun in regular matches. Would really bring back the streamers and youtubers we all miss. https://t.co/mGzeJKqYfg pic.twitter.com/hSMrEEbwQB

In a video of his own, Ninja said he felt Fortnite has become a little too serious and would like to see more "goofy gameplay" in regular games, along with "more skill weapons in arena and competitive." He also called for "more communication out of Epic."
Whether any of this sparks a bit of change remains to be seen. In the meantime, if you're an avid (or even just a casual) Fortnite player, sound off in the comments section below and let us know if you agree or disagree with Ninja and SypherPK.