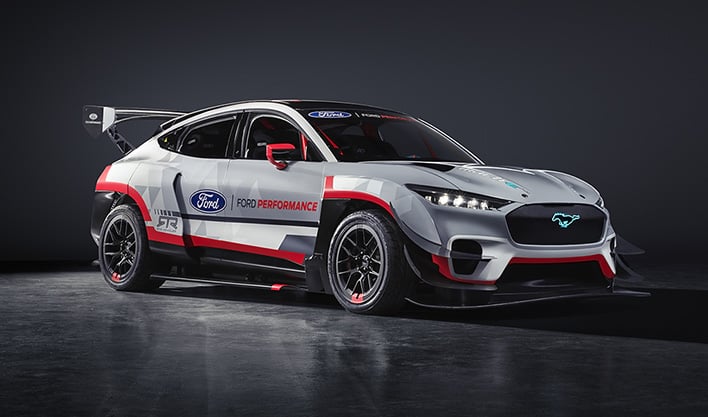 Electric vehicles sure have come a long way. Forget about the Toyota Prius or Honda Insight (an excellent car, by the way), Ford's new all-electric Mustang Mach-E 1400 is a different animal. Sure, it's from the same general family—just as domesticated kittens and lions of the wild are similar. But the Mustang Mach-E 1400 is also wildly different.
Ford describes the Mach-E 1400 as a "road rocket," an apt designation, considering it harnesses the same 1,400 horsepower as the Mustang Cobra Jet 1400, which incidentally is also an all-electric vehicle. In this case, all that muscle comes by way of seven (yes, SEVEN!) electric motors, with power delivery being split evenly between the front and rear, or completely to one or the other.
This is essentially a racing version of Ford's Mustang Mach-E crossover, developed in collaboration with RTR, a performance vehicle company. The mantra here is, "Anything you can do, we can do electric," and that is on display with the Mustang Mach-E 1400. It's a crazy amount of horsepower, with more than 2,300 lb. of downforce, at 160 miles per hour.


"Now is the perfect time to leverage electric technology, learn from it, and apply it to our lineup," said Ron Heiser, chief program engineer, Mustang Mach-E. "Mustang Mach-E is going to be fun to drive, just like every other Mustang before it, but Mustang Mach-E 1400 is completely insane, thanks to the efforts of Ford Performance and RTR."
The seven electric motors inside this thing is five more than what's found inside the Mustang Mach-E GT, which is due to arrive later this year. Three of them are attached to the front differential, and the other four are attached to the rear in pancake style, Ford says, with a driveshaft connecting them to the differentials. 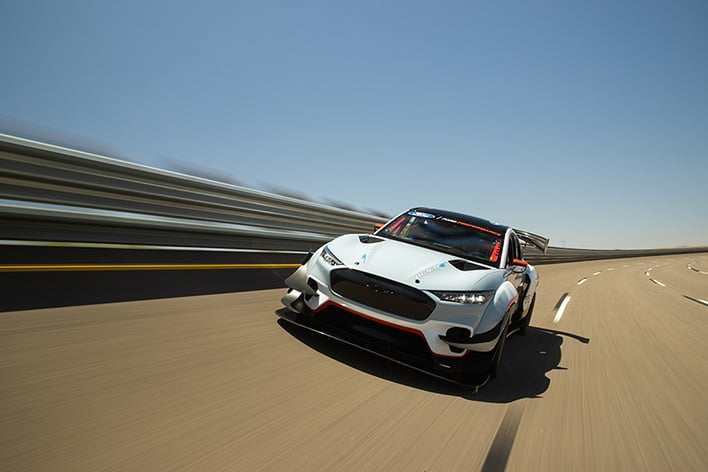 According to Ford, this allows for a huge range of adjustability to set the Mustang Mach-E 1400 up for for everything from drifting to high-speed track racing. It's also built with many of the same tools Ford uses for its race cars and production programs, with optimized aerodynamics, naturally.
"The 56.8-kilowatt-hour battery (installed) is made up of nickel manganese cobalt pouch cells for ultra-high performance and high discharge rate. The battery system is designed to be cooled during charging using a di-electric coolant, decreasing the time needed between runs," Ford explains.
Ford says the Mustang Mach-E will debut at a NASCAR race sometime soon, though didn't say which one. As for the production Mustang Mach-E that you'll actually be able to buy, that will be out in 2020.