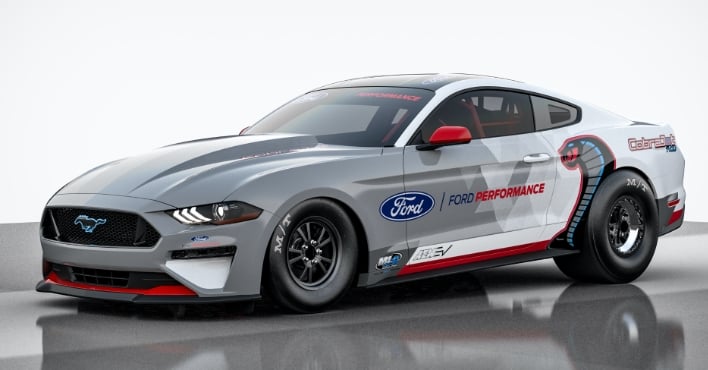 Ford is wasting no time shifting its mindset towards electric vehicles. While the company has embraced EVs in the past with the Focus Electric, it was more of a “compliance vehicle” than something that most Americans would actually want to own. Since then, the company has announced the Mustang Mach-E crossover, which will [hopefully] go into production early next year. Now the company has revealed the Mustang Cobra Jet 1400 dragster, which brings electric power to its motorsports division.

Ford says that this dragster prototype was built to pay homage to the storied Cobra Jet nameplate, which first rose to prominence back in the 1960s. And it definitely delivers the numbers to wear that name thanks to its ability to dart through the ¼ mile in the “low-8-second range” at speeds of over 170mph.

While the production Mustang Mach-E is using motors and software were designed in-house, the Ford Performance division contracted with Cascadia to supply the electric motor and inverter, and teamed up with AEM EV to deliver the software and calibration tools necessary to get this EV powertrain up and running.

"This project was a challenge for all of us at Ford Performance, but a challenge we loved jumping into,” said Mark Rushbrook, Global Director for Ford Performance Motorsports. “We saw the Cobra Jet 1400 project as an opportunity to start developing electric powertrains in a race car package that we already had a lot of experience with, so we had performance benchmarks we wanted to match and beat right now.”

While the Mustang Cobra Jet 1400 is something that you won’t be able to field on public streets – nor would you want to – the Mustang Mach-E will be shipping to customers in Spring 2021. In its top-spec trim, the 459 horsepower, 612 lb-ft Mach-E GT Performance Edition can go from 0 to 60mph in just 3.5 seconds.