The developers working on Microsoft Flight Simulator 2020 have offered up their May 7 development update and have put an exact date on when Episode 8 (IFR) will be released. IFR will be coming to the alpha version of the flight simulator on May 28. For those who may not know, IFR stands for Instrument Flight Rules, and in general aviation, IFR flight is used when pilots know they will be flying in conditions where they can't rely on visual navigation and landmarks for their flight. Instead, they rely entirely on instruments inside the cockpit for navigation and safe flight.

IFR is used when the aircraft may operate in IMC (instrument meteorological conditions), meaning the pilot can't see anything outside of the aircraft windows. IFC is a key component of general aviation, and it will add significantly to the realism of the flight sim. The developers updated on another postponed deliverable with the next partnership series update releasing in early June. 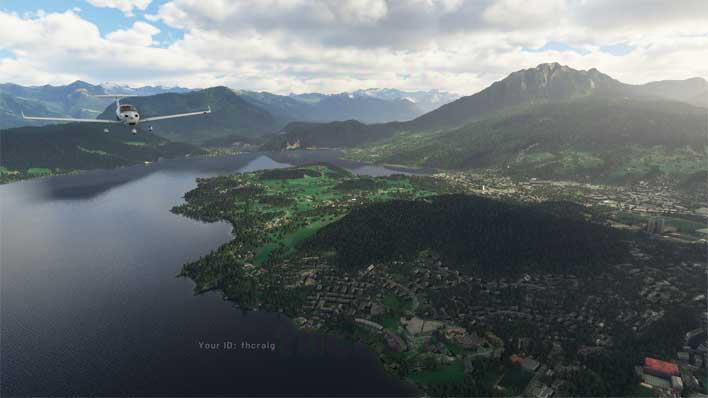 Fans of the flight simulator have been anticipating information on the next alpha build release. Developers have been working hard on alpha build update 1.3.x.x and have announced that it is coming next week, the week of May 11. The alpha build will include several fixes for the Airbus A320 based on community feedback along with the Boeing 747 that was promised in the April 30 update. The Flight Sim 2020 team says the release candidate and the build notes are in final review.

With the new version of the alpha build coming, developers have offered an update on alpha invitation status. Ensuring that everyone that has received an acceptance email has access to the alpha has been completed. The team is currently assessing alpha participation options for adding more people while prioritizing access for those who registered early for pre-release build testing. 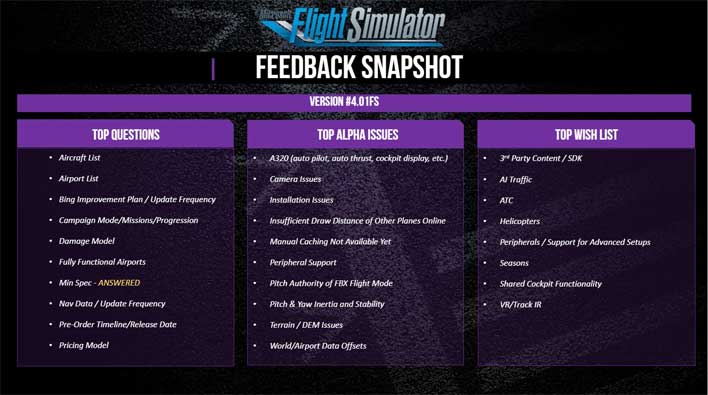 While a new alpha version is coming with some issues fixed, there is still a laundry list of fixes and issues that the developers need to address noted in the latest Feedback Snapshot. Referring to the Airbus A320, the Feedback Snapshot notes there are issues with autopilot, auto thrust, cockpit display, and other items. Other top issues remaining with the sim include problems with installation, camera, draw distance of other planes online, peripheral support, and others.

Top wish list items noted in the Feedback Snapshot include shared cockpit functionality, AI traffic, ATC, helicopters, support for advanced peripheral setups, and others. The Feedback Snapshot, which can be seen above, has finally marked one item off the Top Questions section with the minimum specs question answered last month. The next Flight Simulator 2020 update is expected the week of May 11.