Is This The First Screenshot From Google's Upcoming Pixel 6 Pro Flagship?

Google has only casually mentioned the Pixel 6 Pro and Pixel 6, a pair of upcoming handsets that will sport a new custom system-on-chip (SoC) that the company is calling Tensor, which is supposedly the "biggest innovation in Pixel to date." But in what can possibly be classified as an inadvertent leak, Google may have also confirmed an under-display fingerprint reader will adorn the Pixel 6 series as well.
The Pixel 6 series is aiming for flagship status, as opposed to the Pixel 5a, which plants itself firmly into mid-range territory (it's a battery life beast, as we noted in our recent Pixel 5a review). You can pre-order the Pixel 5a right now, ahead of its August 26 release. Meanwhile, Google boss Sundar Pichai said the Pixel 6 lineup will debut this fall.
As to the under-display fingerprint sensor that might accompany it, this was seemingly confirmed in a screenshot shared to Twitter by Hiroshi Lockheimer, a founding member of Google's Android team (formed after Google acquired the OS), and currently the senior vice president of Android, Chrome, and Chrome OS & Play. 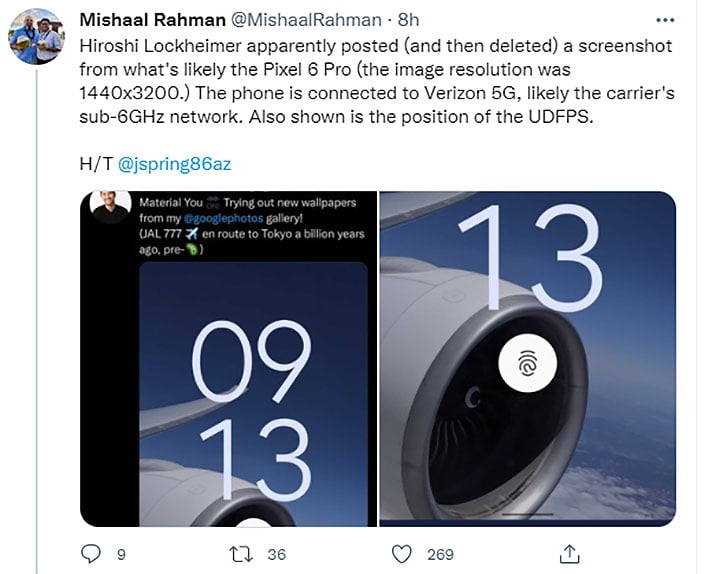 Lockheimer has since deleted the tweet, perhaps because he didn't mean to reveal any hardware details, but not before Mishaal Rahman from XDA Developers could grab a screenshot. That's what you see above.
"Material You. Trying out new wallpapers from my @googlephotos gallery! (JAL 777 en route to Tokyo a billion years ago)," Lockheimer tweeted.
Google unveiled Material You at its I/O event earlier this year. It's pitched to be a "radical new way to think about design," giving users more control over customizing the user interface (UI). It's a major upgrade to the Material Design language, part of which entails themes based on wallpapers through "color extraction." And Lockheimer wanted to posted to a tease.
He did, but he also teased a rumored feature that has not yet been announced. His shared screenshot depicts the lock screen, and we see a white circle with a fingerprint icon stamped in the middle, positioned in the lower third section of the phone. Whether this was truly inadvertent or posted and deleted to generate buzz, only Google knows.
Either way, it would be surprising if at the very least the Pixel 6 Pro did not come with an under-display fingerprint reader. It's probably also bound for the regular Pixel 6 as well.
Additionally, it's said the original photo is 3200x1440, but that's because it was downloaded to a Samsung Galaxy S1 Ultra handset. Rahman notes that the Pixel 6 Pro's resolution should be 3210x1440, based on wallpapers it managed to snatch a few weeks ago.
In any event, the Pixel 6 and 6 Pro are shaping up to be interesting flagships. The phones are rumored to be eschewing Qualcomm and its Snapdragon 888 SoC in favor of a modified Samsung Exynos 2100 chip, with graphics based on AMD's RDNA 2 architecture on board. An under-display fingerprint scanner could be icing on the cake.