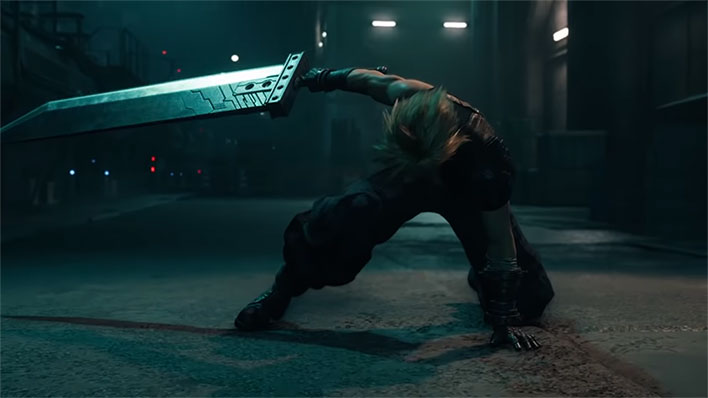 If you were maybe worried Square Enix might have scrapped its planned remake of Final Fantasy VII here in the home stretch for some reason, rest easy knowing it is coming. We can say this with confidence because of a newly leaked video clip showcasing the opening scene. The clip is a little over three and a half minutes long, and is enough to get any fan of the series excited.
The only bummer is that it is limited to 720p, but whatever, we will take what we can get. It starts off with a demo screen for "Final Fantasy VII Remake," after which the opening scene begins in earnest. The camera zooms in on the flower girl Aerith Gainsborough, and then pans out to give us an aerial view of Midgar.

It looks fantastic (even just in 720p), and the accompanying musical arrangement is really well done too. Fans who remember the original release way back in 1997 are having emotional reactions to the leaked video, as is understandable. At present, the video clip boasts over 4,700 likes to just 79 dislikes (curmudgeons!).
"Holy crap the amount of chills I got when that logo hit the screen...," one user wrote. Another one reacted, "When that music started up as they were zooming out for the shot of midgar.........tears in my eyes. This game is special to me and I can't wait for the remake. Nobuo Uematsu is back to compose all the music which is the best news ever too."
Beyond the feels the clip elicits, it suggests a demo will find its way to PlayStation 4 consoles in the very near future. Which makes total sense, as the last we heard from Square Enix, the first episode in the remake will launch on March 3, 2020.
Barring a last minute change, the episodic format stands, with the first episode said to be spanning two discs. It will put players in the city of Midgar and is a fully standalone title. In addition, Square Enix revamped the Active Time Battle System—players will be able to change characters during missions, and can move around and attack freely rather than having combat be turn-based.