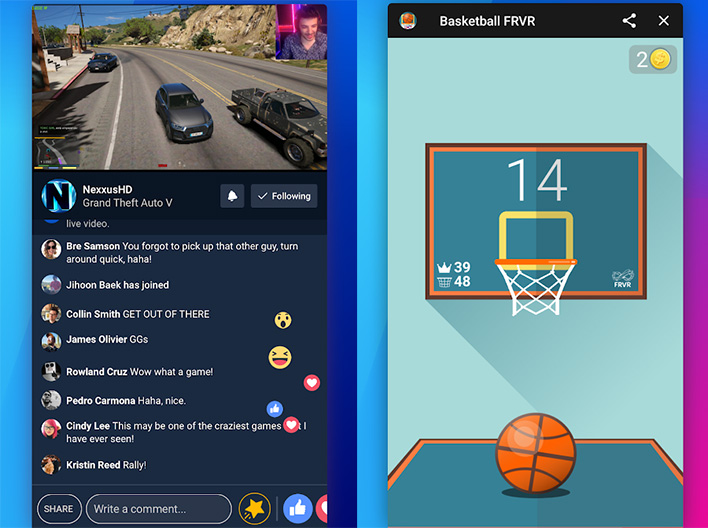 Facebook has finally gained clearance from Apple to launch its Facebook Gaming service in the App Store, though only after gimping the service, much to the social network's chagrin. In order to not be in violation of Apple's rules and guidelines for iOS apps hosted in the App Store, Facebook had to remove the ability to play mini games.
For the most part, Facebook Gaming is used to watch others play games, similar to Twitch and Mixer (before Microsoft bowed out and abruptly shut Mixer down). But it does also have some mini games people can play, at least on the Android version in Google Play. No dice for iOS users, unfortunately. And Facebook isn't happy about the decision, as it relayed in a statement to The Verge.
"Unfortunately, we had to remove gameplay functionality entirely in order to get Apple’s approval on the standalone Facebook Gaming app—meaning iOS users have an inferior experience to those using Android," Facebook's COO Sheryl Sandberg, Facebook said. "We’re staying focused on building communities for the more than 380 million people who play games on Facebook every month—whether Apple allows it in a standalone app or not."
According to Facebook, it tried multiple times to get its app approved on the App Store, but was repeatedly shot down by Apple. The social network claims Apple was fond of citing App Store guideline 4.7, on the basis that from its vantage point, Facebook Gaming is primarily focused on playing games. It clearly is not, though.
Facebook even shared some data with Apple, indicating that the vast majority of activity on Facebook Gaming—95 percent—is watching streams. Apple was not swayed by the argument, and did not respond to an appeal filed by Facebook on its guideline.
Apple has come under fire for its strict guidelines, most recently when Microsoft had to abandon its xCloud testing on iOS after it was clear the app would not be allowed on iOS. A ticked off Microsoft told The Verge that "Apple stands alone as the only general purpose platform to deny consumers from cloud gaming and game subscription services like Xbox Game Pass."
Indeed, Google's Stadia and NVIDIA's GeForce Now platforms are not allowed in the App Store, either.
"Our customers enjoy great apps and games from millions of developers, and gaming services can absolutely launch on the App Store as long as they follow the same set of guidelines applicable to all developers, including submitting games individually for review, and appearing in charts and search," Apple said.
Apple seems to be taking the stance that it does not have the resources to review each game on any particular streaming service. However, the same concept apparently does not apply to streaming video services, like Netflix, Hulu, and YouTube. Go figure.