If you've been following New World, the first title out of Amazon's PC game development, you'll know it's been a bit of a bumpy ride. Something about the game was reportedly causing certain GeForce RTX 3090 cards to keel over and die. Reports were pouring in all over Reddit of graphics cards from a variety of manufacturers that seized or went black while displaying the in-game menu of New World's closed beta. After that, the party was over and the graphics card was dead.

Fortunately, all hope is not lost for gamers whose cards fell victim to whatever caused this issue. YouTuber JayzTwoCents did his own investigations into the trouble, and says he's measuring GeForce RTX 3090 graphics cards pulling more than their supposed 400 Watt limit within the game. Even in our own review of NVIDIA's BFGPU, we observed instances of this happening, although the average was much lower. While it's tempting to lay the blame at the feet of Amazon and its development studios, graphics cards probably shouldn't exceed their specified limits for very long.

Deep in that video he says that at least one manufacturer is replacing cards already, including cross-shipping replacements to affected gamers. EVGA is that company, and it says that some gamers should are already receiving those replacement GeForce RTX 3090 cards from the company without the need to return the broken card first.


One interesting takeaway is that manufacturers hold back a certain amount of stock to deal with warranty issues. Thankfully for these graphics card owners, EVGA did just that, so it had the reserves available when trouble arose. Like many vendors, EVGA requires buyers to register the graphics card and a copy of the purchase receipt to their account, so the company already knows gamers have the card in question, so a cross-shipping arrangement is viable.

The problem is apparently not limited to just GeForce RTX 3090s, either. JayzTwoCents says he's heard from owners of a variety of graphics cards from several different families, all the way back to the Polaris-based Radeon RX 500 series. Each says they've experienced some sort of shutdown or failure within the New World closed beta. 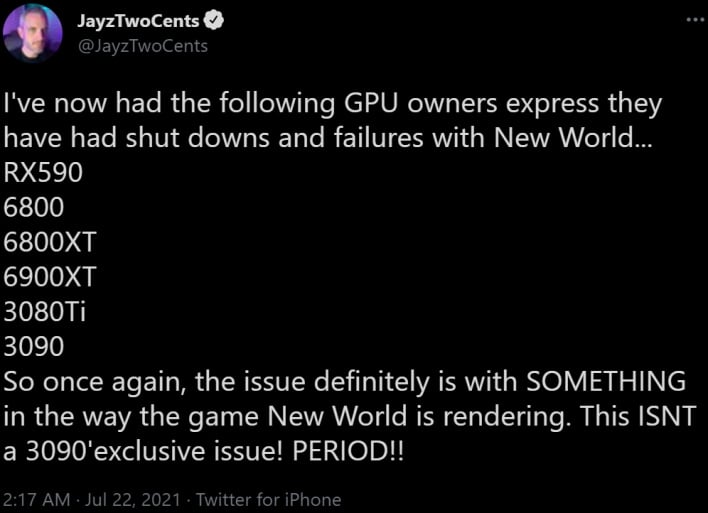 Cards from both AMD and NVIDIA are apparently susceptible to whatever affects New World (via: Twitter)

Fortunately, Amazon says a fix is coming to limit the frame rate on the affected screens so that the cards don't work themselves to death. In the interim, the company recommended resetting any driver overrides and limiting the frame rate in the NVIDIA or AMD graphics control panel. It also wouldn't surprise us to see AMD and NVIDIA start to account for New World's apparent penchant to run off the rails, which is sure to spark more fury as the accusations will likely turn from "bricking cards" to "throttling performance". There's just no pleasing some folks.

At any rate, even in this time of shortages and scalping to see a manufacturer take care of its customers. This looks like EVGA living up to its reputation for good customer service -- something I've experienced first-hand in the GTX 970 days -- and we hope to see other companies do more of the same.