Amazon's game development team is now planning to issue a patch for the New World MMORPG that has made headlines this week for all the wrong reasons. Well, one wrong reason specifically—reports that it is somehow killing expensive GeForce RTX 3090 graphics cards, possibly by cooking the memory chips (as one of the theories goes).
Reports of issues with NVIDIA's top-tier graphics card surfaced after New World's closed beta went live on Tuesday morning. In multiple threads (on Reddit and New World's forums), users claimed the game was frying their GeForce RTX 3090 hardware, to the point where the cards were no longer functioning, necessitating a warranty replacement. That is never a pleasant situation, but given the cost of the card and the current GPU shortage, it is especially unfortunate to have a flagship GPU (or any GPU) go belly-up.

Almost all of the reports we have seen point to EVGA's GeForce RTX 3090 FTW3 Ultra model, though we are aware of at least one claim that a Gigabyte-brand card gave up the ghost after playing New World as well. Users have suggested going into NVIDIA's Control Panel to lock the frame rate at 60 frames per second, in the belief that leaving it uncapped in the game is causing some cards to go haywire.
This received a lot of attention in the media, and now Amazon has issued a couple of statements. One of them can be found in the New World forums, where Amazon said it is introducing a patch that will allow players to cap their frame rates from within the game.
Here's the statement... 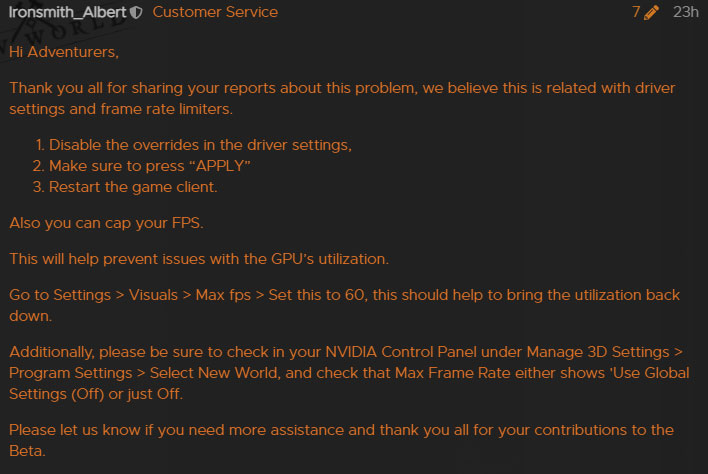 Amazon believes the culprit is "related with driver settings and frame rate limiters," though does not go into detail. However, it does recommend disabling overrides in the driver settings for your GPU, manually capping frame rates within the NVIDIA Control Panel as users had been suggesting, and while in there, ensuring that New World's Max Frame Rate setting is configured to 'Use Global Settings (Off)' or just 'Off'.
You shouldn't need to muck around the NVIDIA Control Panel once the patch is out (today, presumably), but you may want to initially anyway, even after applying the patch. Then once you've gone into the game and limited the frame rate in the Settings menu, you can revert your NVIDIA Control Panel settings back to what they were. I say this because some reports suggest the issue crops up even in the Settings menus, not just while playing the game.

In a separate emailed statement (that was also posted to Twitter), Amazon acknowledged reports of dying GeForce RTX 3090 hardware, but downplayed the prevalence, saying it has "seen no indication of widespread issues with 3090s, either in the beta or during our many months of alpha testing." Make of that what you will.

Here is the statement in full...

"Hundreds of thousands of people played in the New World Closed Beta yesterday, with millions of total hours played. We’ve received a few reports of players using high-performance graphics cards experiencing hardware failure when playing New World.
New World makes standard DirectX calls as provided by the Windows API. We have seen no indication of widespread issues with 3090s, either in the beta or during our many months of alpha testing.
The New World Closed Beta is safe to play. In order to further reassure players, we will implement a patch today that caps frames per second on our menu screen. We’re grateful for the support New World is receiving from players around the world, and will keep listening to their feedback throughout Beta and beyond."

Summed up, Amazon is essentially saying the game is the not the issue, perhaps hinting at a design flaw in the hardware or related to NVIDIA's drivers, but will issue a patch anyway.
Meanwhile, we understand EVGA and NVIDIA are both investigating the reports of card failures as well. In a statement provided to PCWorld, EVGA said any cards that kick the bucket while playing New World will be "completely under warranty," and hopefully that also means they have stock tucked away specifically for RMA claims.
This is an interesting situation for sure. It's curious to us that game would be capable of killing a graphics card, given the multiple safety measures that are in place. Hopefully EVGA and NVIDIA will be able to shed some light on the situation soon.