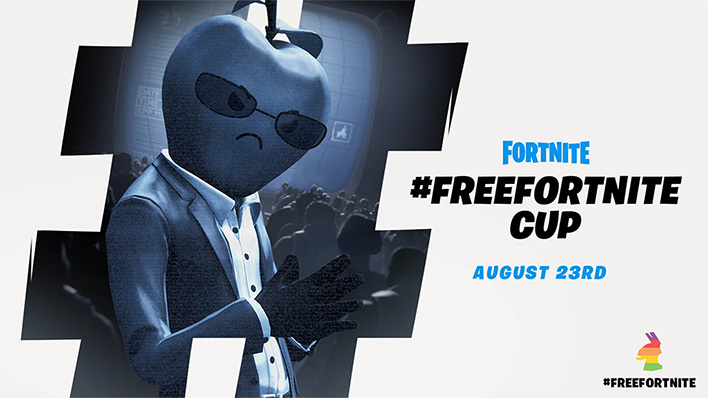 Epic Games is turning lemons into lemonade bad apples into delicious apple sauce with a Fortnite tournament and some sweet prizes up for grabs. As in, you could win a high powered gaming laptop or a swank console, along with other desirable gear. The whole thing flies in the face of Apple's decision to ban Fortnite from the App Store.
In case you missed the drama over the last week-ish, let's get you up to speed. Epic Games released an update for Fortnite that introduced its own in-game payment system, thereby sidestepping Apple's royalty rate. Same goes for Google Play. This did not sit well with either Apple or Google, and both kicked Fortnite from their respective app stores, which in turn spurred a lawsuit from Epic Games.
This riff between Epic Games and Apple and Google could linger on. In the meantime, you could head to eBay and pay an insane price for an iPhone with Fortnite installed—they're selling for $10,000!—or get on Fortnite however you can and compete for some prizes, as part of the #FreeFortnite Cup.

All of your friends. Fabulous prizes. And one bad apple. We’re droppin the #FreeFortnite Cup on August 23.

Check out our blog for full info: https://t.co/BFpiMQoWID

"Celebrate the quest for one more Victory Royale with friends across all platforms in the #FreeFortnite Cup this Sunday, August 23. Drop in for an opportunity to win more prizes than ever before including the new Tart Tycoon Outfit, gaming hardware, and exclusive apparel," Epic Games says.
Epic Games points out that these are the final days for the entire Fortnite community to play together. Chapter 2 Season 3 is coming to an end, and iOS players will be left behind with Chapter 2 Season 4, when it launches on August 27.
To play in the tournament, head to the in-game Compete tab to see when the event starts in your region (on August 23), then select the #FreeFortnite Cup Playlist at the appropriate time. Players will have four hours to rack up points, in up to a dozen matches. You get 1 point for every 3 minutes on the BR island, 1 point per elimination, and 10 points for every Victory Royale.
Top scoring players will receive one of 20,000 adjustable hats. In addition, Epic Games is giving away 1,200 higher priced rewards, including an Alienware gaming laptop, Samsung Galaxy Tab S7, OnePlus 8 phone, PlayStation 4 Pro console, Xbox One X console, and a Nintendo Switch console.