Tesla founder Elon Musk ruffled some feathers on Twitter by announcing that Tesla is no longer accepting Bitcoin currency. Just hours after the tweet went out, Bitcoin's value plunged 17 percent from around $54,800 to $45,700. It has since regained some of its value, but the cryptocurrency is still down more than 10 percent in 24 hours as investors mull the implications.

The announcement comes less than two months after Musk tweeted out, "You can now buy a Tesla with Bitcoin" in the United States. At the time, Musk said Tesla would also accept Bitcoin from outside the US sometime later this year. And back in January, Tesla had invested $1.5 billion in Bitcoin, according to its annual 10-K report with the Securities and Exchange Commission (SEC).
So, what prompted Tesla to go from accepting Bitcoin for EV purchases, to banishing the world's most valuable cryptocurrency? Fossil fuels and environmental concerns, apparently.. 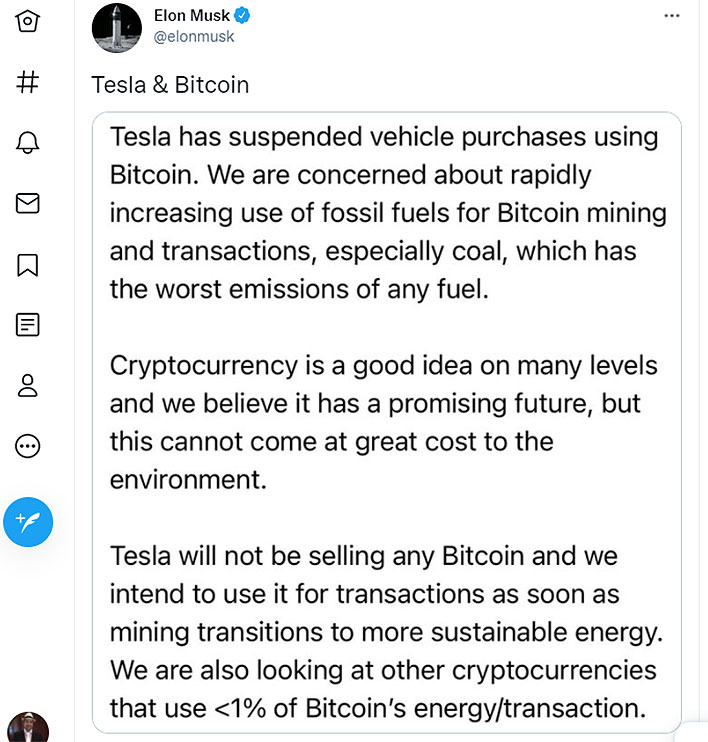 "Tesla has suspended vehicle purchases using Bitcoin. We are concerned about rapidly increasing use of fossil fuels for Bitcoin mining and transactions, especially coal, which has the worst emissions of any fuel," Musk wrote.
He went on to say that cryptocurrency "has a promising future, but this cannot come at great cost to the environment." Which raises the question, how did Musk and Tesla not know about the potential downside of cryptocurrency when investing a billion and half dollars into Bitcoin? That is a massive investment to make on Bitcoin, only to turn sour on it a few months later.
The announcement prompted a range of responses. Some took to the Twitter thread to point out how much money they lost after Bitcoin's value took a nosedive, others pitched cryptocurrencies they claim consume less energy than Bitcoin. And there were folks who accused Musk of foul play.
"Stop manipulating the market, Elon," a user wrote. Another person tweeted, "I really hope the SEC comes after you for this one."
Others called into question his claim that Bitcoin is a more of a drain on energy than other popular forms of cryptocurrency. In any event, it is a surprising and ironic turn of events, considering how high Mush has been on cryptocurrency in general.
More recently, Musk has been having fun hyping Dogecoin, the meme cryptocurrency that started off as a joke. Incidentally, the value of Dogecoin also spiraled downwards after Musk's announced Tesla's surprising u-turn, dropping 15 percent in 24 hours. Meanwhile, Tesla's share price is up 2.11 percent at the time of this writing.