In February, we reported that Tesla went in on Bitcoin, investing $1.5 billion and laying the groundwork to accept payments using the cryptocurrency. Since then, Bitcoin is up over $13,000, which has earned Elon Musk’s company in the neighborhood of $480 million. Now, Tesla intends to increase its amassed wealth by allowing new Tesla purchases to be completed using Bitcoin.


In a brief series of Tweets overnight, Musk announced that Tesla is now accepting Bitcoin payments within the US. Later this year, the feature will roll out worldwide so anyone can use their cryptocurrency wallet to make a Tesla purchase. As one astute Twitter user amusingly pointed out, you can now trade an appreciating item for a depreciating item.

Pay by Bitcoin capability available outside US later this year

Interestingly, Musk also tweeted that “Bitcoin paid to Tesla will be retained as Bitcoin, not converted to fiat currency.” This move should vastly increase Tesla’s wealth of Bitcoin and increase the value of the cryptocurrency for all. Over the last year, Bitcoin has increased in value by approximately 742 percent, up to $56,000 at the time of writing. With Musk’s endorsement, that trend is likely to continue accelerating. 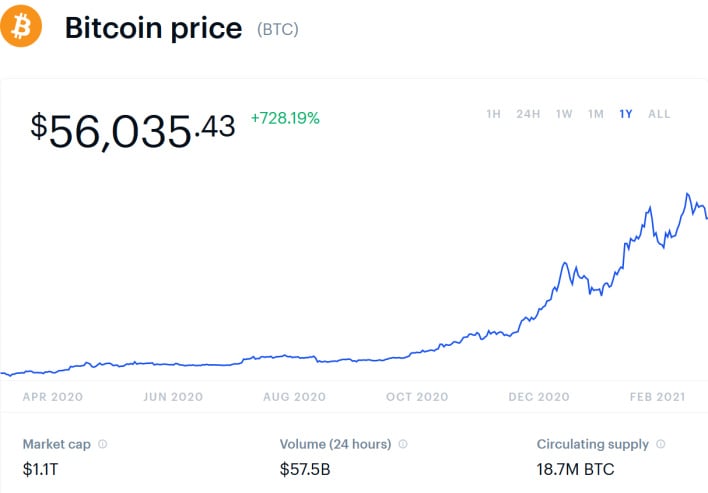 Overall, it is now, more than ever, an exciting time to be a Bitcoin owner as the future projections look decent, provided nothing major happens. Perhaps we will see Bitcoin crest that $100k mark by year-end given its trajectory, but we will have to wait and see. Either way, keep an eye on HotHardware for updates on major cryptocurrency movements.