Dogecoin, a form of cryptocurrency that seemingly began as a gag based on a popular meme featuring Shiba Inu, is rapidly rising in value. How high it ultimately goes remains to be seen, but the joke coin currently has owners of the cryptocurrency laughing all the way to the bank, with their digital coin wallets in tow.
These are interesting times we find ourselves in, folks. Everything you might have learned in Investing 101 went right out the window when, in recent weeks, the WallStreetBets subreddit turned the stock market into the so-called "stonk" market, drumming up interest in shares of struggling companies like GameStop, AMC, and others.
Then the attention turned to Dogecoin. Back on January 28, Twitter user @WSBChairman (not associated with WallStreetBets) posed the question, "Has Doge ever been to a dollar?" The digital currency promptly skyrocked in value, going from around $0.007 (a fraction of a cent) to a little over 7 cents in a single day. Then as cryptocurrencies are prone to do, it exhibited more volatility, falling several cents. 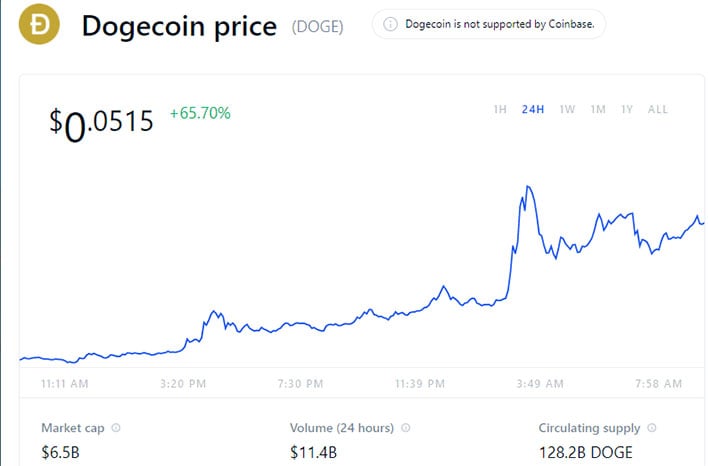 Dogecoin is back on the rise again this morning, jumping more than 65 percent to around a nickel per coin. So, what gives? The power of social media, and specifically the influence Tesla CEO and founder Elon Musk has on this sort of thing.
In a series of recent tweets, Musk said "Dogecoin is the people's crytpo... No highs, no lows, only Doge." And just like that, the cryptocurrency market went bananas again, sending the goodest-of-boys coin on a sharp rise, which is what we are witnessing today.

It appears to be all in good fun, even though real investments and money are at stake. Having tweeted about Dogecoin previously, Musk admitted during a Clubhouse interview that "occasionally I make jokes about Dogecoin, but they are really just meant to be jokes."
Still, the influence Musk wields is not lost on him. After seeing his latest comments push Dogecoin up more than 65 percent, he tweeted out a hilarious picture of himself and the Dogecoin dog edited into an image from The Lion King—it's the scene where Rafiki holds up Simba on Pride Rock, with Musk adding the caption "ur welcome."
Of course, when you are the richest person on the planet (Musk's net worth is estimated to be around $183 billion), you can afford to laugh at the volatile swings of what has become a topsy-turvy market all around. Strange times indeed!