Elden Ring Is A Massive Hit With 12M Copies Sold In 18 Days, TV Series Could Be Next

In case you haven't heard, there's a little game called Elden Ring that came out around two and a half weeks ago. Actually, it's not so little, and of course you've heard because it is off to a wildly successful start, proving there's a rabid fan base for games that dial up the difficulty. The proof is in the early the sales milestone—over 12 million copies sold across all platforms.
That's a staggering figure, considering the game released less than three full weeks ago (18 days). And the actual number sits somewhere north of 12 million copies, as sales officially surpassed that mark on March 14 (two days ago).

"It's astonishing to see just how many people have been playing Elden Ring. I'd like to extend our heartfelt thanks on behalf of the entire development team," said Hidetaka Miyazaki, President and CEO/Director of FromSoftware. "Elden Rings based on a mythological story written by George R. R. Martin. We hope players enjoy a high level of freedom when adventuring through its vast world, exploring its many secrets and facing up to its many threats. Thank you for your continued support."
Miyazaki also directed the immensely popular Dark Souls series, the last of which (Dark Souls III) was released six years ago, along with Bloodborne and, more recently, the 2019 release of Sekiro: Shadows Die Twice. The high difficulty level and resulting satisfaction that comes from tough-to-beat enemies is part of the overall appeal. 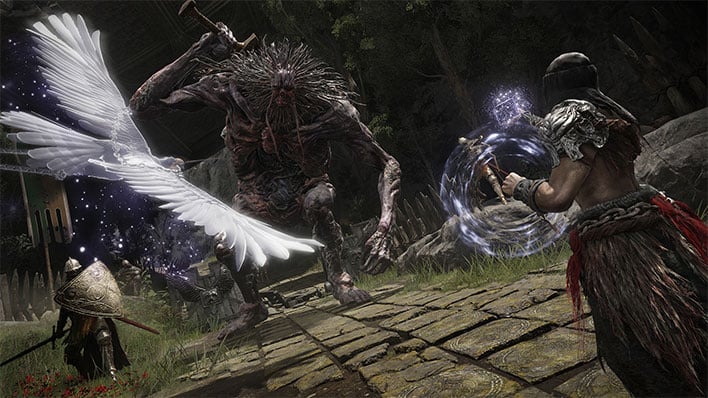 Even so, players have adapted quite well to Elden Ring's challenging design. We've seen a streamer beat the game using a Nintendo Ring Fit controller, and speedruns have dipped below 30 minutes.
That said, there are mods available to make the game easier or more difficult, depending on your preference. But what comes next? Miyazaki said Bandai Namco and FromSoftware are looking at "expanding the brand beyond the game itself and into everyone's daily life." And elsewhere in the announcement, Elden Ring is referred to as a franchise.
There are some takeaways there. One is that we can probably expect a sequel, this being a franchise and all. And second, the desire to expand Elden Ring beyond video games opens a world of possibilities. Tabletop games, movies, a TV series—it's probably all being considered. And with regards to a possible TV series, there are multiple blueprints in place already. Just look at The Witcher, which is going into its third season on Netflix.
In any event, selling 12 million copies of Elden Ring is a fine achievement, but also just the beginning.