FromSoftware's latest game, Elden Ring, may not wear the "Souls" moniker, but it's certainly a spiritual sequel to that storied series (with more than a little bit of Sekiro sprinkled in for taste.) The "Soulsborne" series is notorious for its difficulty, arising in part from its relatively deep mechanics that require players to master the games' complex and idiosyncratic controls.


So saying, it's pretty surprising even to veteran players when you can down one of the game's difficult bosses on the first try, and that means it's even more shocking when Twitch streamer SuperLouis64 beats Bloodhound Knight Darriwil on the first try while playing with the Nintendo Switch Ring Fit Adventure controller. 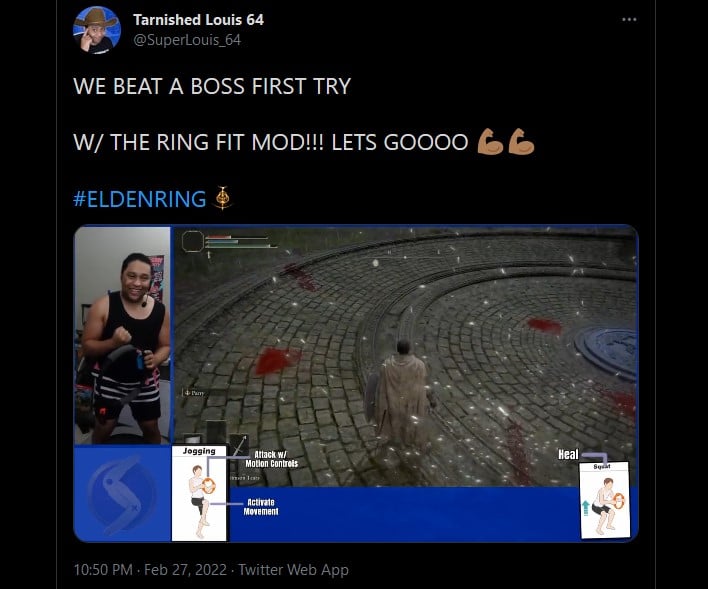 For those unfamiliar, Ring Fit Adventure is a Nintendo Switch game where players strap one of the Switch's Joy-Cons to their thigh, and then insert the other one into a flexible ring. That game involves players defeating monsters and progressing through challenges by performing specific exercises, and the game makes use of the Joy-Cons' advanced motion controls to track your movements and make sure you're really doing the exercises.


Never mind the frankly poor quality of the Switch Joy-Cons' sticks and buttons—SuperLouis64 can't even move his character unless he's jogging in place. He also loses half the inputs available to him because one of the Joy-Cons is strapped to his thigh for motion detection. To attack, he has to swing the twelve-inch ring in front of him, and to heal himself or use other consumable items, he has to squat in place.


We're not quite completely sure, but based on our understanding of the inputs he has available and the actions in the game, he likely only has access to a very limited sub-set of the game's functions. Elden Ring is even more mechanically-complex than Dark Souls III, Sekiro, or Bloodborne, and being limited in this way is only increasing the challenge.
Obviously, this isn't the motion-controlled future we envisioned back when we were playing 16-bit games with the Sega Activator; rather than immersing SuperLouis64 in the game, it's actually making it much harder for him to play. With that understanding, his victory is all the more impressive. Cheers to SuperLouis64 for his accomplishment, both in-game and also in creating the controller mapping that allows him to play this way.