If your community is still putting on a fireworks display for New Year’s Eve, this could possibly be the last such event. We love the whizzes, bangs and rockets lighting up the sky, but the growing use of drones for light shows could make the real pyrotechnics a thing of the past and there are a few obvious benefits as well. 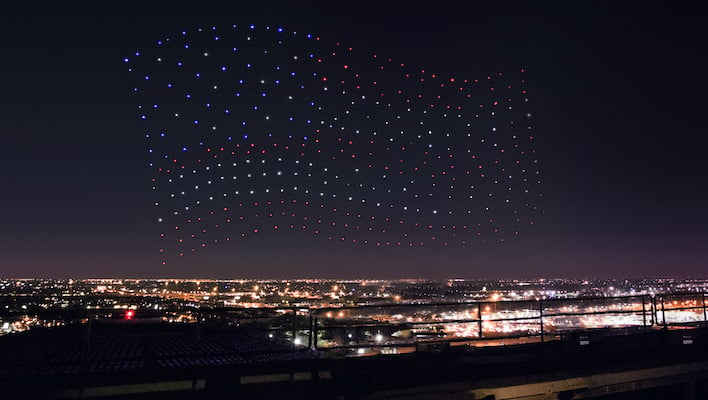 Last year, entertainment company SkyMagic used a fleet of 300 drones to put on display for the mayor of London’s new year celebration. As the technology built into drones evolves, they’ll become even more capable of replacing fireworks displays on a large scale.

During the opening ceremony of this year’s Olympics in Tokyo, a fleet of drones lit up the sky. In addition, the Over the Top New Years Eve event in Dallas, Texas, will combine fireworks and drones to welcome in 2022.

Part of the appeal is a movement against fireworks. Robert Neff, partner and general manager at Derbyshire’s Mercia Marina, explained that animal-lovers are a huge factor at play. “[Owners of boats with cats and dogs] often commented on how much distress is caused to their pets by the fireworks”.

Drones also offer additional benefits, SkyMagic’s Ollie Howitt points out. “They’re no emission, they’re reusable, there’s no fallout or any debris or that kind of thing. So in that sense they are a very good, sustainable option,” he said.

Naturally, those involved in the fireworks industry beg to differ. A spokesperson for the British Fireworks Association told The Guardian that drones present environmental concerns of their own. “[W]e have grave concerns about electrical demand and use of lithium batteries which are known not to be all that ‘green’,” they said.

Experts also note that drones can spook horses and livestock, as well as collide with birds. Furthermore, large-scale drone swarms need to be properly coordinated with local aviation and air traffic authorities.

Finally, of course, drones don’t make the “crackle and bang” that many folks enjoy in these light show extravaganzas. Drone-crafted light shows can certainly offer a visual display, but there’s little audio effect the vehicles can provide. That’s a major factor behind some professionals combining drones and pyrotechnical displays together.

Which would you prefer for holiday celebrations? A pyrotechnical display with flashes, bangs, and crackles, or a drone swarm light show that offers plenty of visual appeal but no audible explosions?