According to id Software, the upcoming Doom Eternal will be "the best game we've ever made." That is a tall order to fill considering a string of great games that has come out of the software house over the past nearly three decades, but early trailers for the game have us buying into the hype.

We're equally impressed with new footage of actual gameplay from Doom Eternal, which was uploaded this week by the folks over at IGN. We're given a roughly 10-minute look at the game right from its opening moments. Right off the bat we get early glimpses at the shotgun, sticky bombs, and even the fan-favorite (and might we add, quite satisfying) chainsaw in action against the baddies.

As with previous games in the franchise, the action is fast-paced, and the graphics (and gore) look amazing at 4K resolution running at a buttery smooth 60 fps. In fact, the crisp graphics and lighting effects don't make us sad one bit that id Software isn't infusing the game with real-time ray tracing support on GeForce RTX graphics cards.

"So, we actually haven't talked about [ray tracing] at all, and we quite frankly haven't spent a ton of time [on it]," said id Software studio director Mary Stratton in January. "The team basically did some initial implementation and exploration about a year ago, but at that same time we had so much that we wanted to do on the game still." 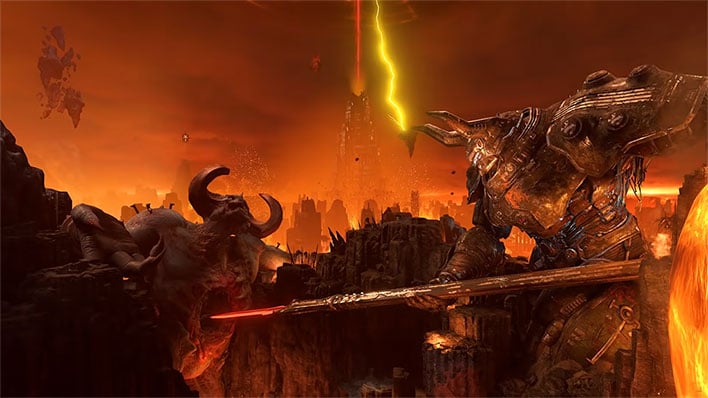 Considering that the game was already delayed once, the decision not to put ray tracing in the game is understandable. As is stands now -- barring any further delays -- Doom Eternal will launch on March 20th for PC, PlayStation 4, Xbox One, and Google Stadia; the Nintendo Switch port will arrive later this year. Doom Eternal will become the fifth [mainline] outing in the Doom franchise, and is the follow-up to the Doom reboot that launched in 2016.