Dell isn't looking to reinvent system memory, but it does want the industry move to what it claims is a superior form factor for today's increasingly thinner and lighter laptops. That's what you're looking at in the image above—it's called CAMM, or Compression Attached Memory Module, and far as Dell is concerned it is not a proprietary design.
There are nuances to that claim. CAMM looks like no other memory module on the market, certainly not like the SO-DIMMs in your current laptop or the full-size DIMMs inside your desktop, and Dell holds the patent on the design. Its recently introduced Precision models will be its first mobile workstations to feature DDR5 memory in the CAMM form factor.
If Dell is the only one using CAMM and Dell holds the patent, how exactly is it not proprietary? In an interview with Gordon Ung at PCWorld, both the person who designed and patented CAMM and the product manager of the first Precision laptop to adopt it made clear the intent was not to lock users out of easy upgrades, but to bust through bandwidth ceilings that are on the horizon for SO-DIMMs. 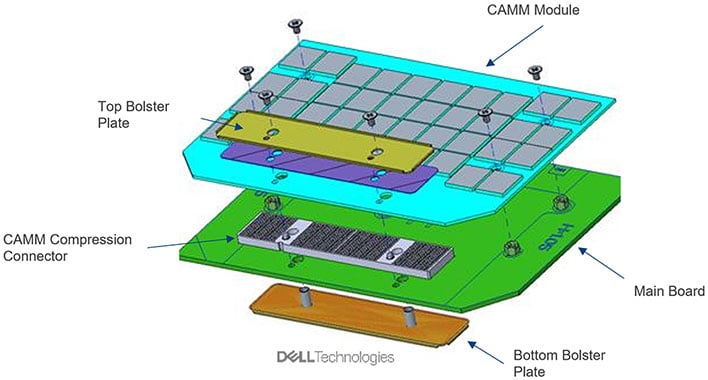 "One of the tenants of the PC industry is standards," said Tom Schnell, Senior Distinguished Engineer at Dell who designed most of CAMM. "We believe in that; we put standards into our products. We’re not keeping it to ourselves, we hope it becomes the next industry standard."
Not everyone is going to agree with Dell's assessment of CAMM not being a proprietary standard, though Schnell does raise an interesting point. Proprietary designs are usually intended to keep customers within a company's own ecosystem of hardware, and/or because it's more convenient for the manufacturer from a mass production standpoint.Dell isn't immune to this—in our XPS Desktop 8950 review, we noted a non-standard motherboard that effectively means it can't be transferred to another chassis.
However, the message from Dell is that it feels CAMM is a better form factor for the future, and it hopes the industry at large will adopt it. To that end, CAMM still uses standard DRAM chips. The question that's not answered (not yet, anyway) is what that will mean in terms of royalties. In the interview, Dell downplayed things, pointing out that a typical laptop is rife with cross-licensed technologies, and that JEDEC requires standards adhere to its Reasonable and Non-Discretionary (RAND) terms. That latter point means licenses can't be cost prohibitive, nor would Dell be allowed to discriminate against competing companies if it wants JEDEC's backing (which it sounds like it does).

The other positive here is that Dell isn't forcing Precision laptop buyers to embrace CAMM. It will also offer SO-DIMM versions. Down the line, however, buyers may end up preferring CAMM. Consider that a laptop with an Intel 12th Gen Core Alder Lake processor is capable of running at DDR5-4800 with two modules, but if a mobile workstation is stuffed with 128GB of RAM, it has to be pulled back to DDR5-4000 unless bumping up to four modules, which might have to be stacked (as shown above). That's not the case with CAMM, which can run 128GB at DDR5-4800 without issue.
CAMM is also thinner and should be able to dissipate heat better, Dell said in the interview. So there are definite benefits that you don't necessarily get with proprietary designs. That said, it's too early to tell how this will play out